Opened in 1963 with several other new buildings when Santa Clara became coeducational, Benson Memorial Center in 1989 was the first building on campus to go “smoke free” and to promote recycling through the use of public containers. Considered the center of student life on campus, Benson Memorial Center will see the second renovation in its history when work begins this February on a two-phase project. Upgrades will include 600 square feet of new windows and an outdoor patio being turned into an atrium-like enclosed area, with both changes intended to enhance the student experience when dining and interacting. The second phase will focus on meeting rooms, office realignment, and common areas. 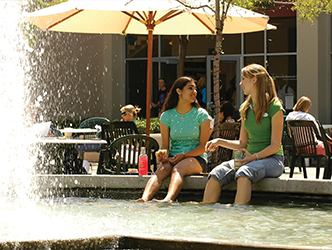 The most iconic figure of Benson Memorial Center is the Donohoe Fountain, named after former Santa Clara president and Jesuit priest Patrick A. Donohoe. It is located on the Alumni Terrace on the north side of the building. “Regardless of the season you’ll find students, staff, and faculty congregating around the fountain over casual conservation, posing in front of it for graduation photos, and children gliding their hands over the water’s surface as they pass through campus with their parents,” said Assistant Director Leah Nakasaki-Peterson. Donohoe Fountain is also where the Santa Clara commencement lines form for seniors walking to the outdoor ceremony. Earlier in the day, Benson Memorial Center hosts a pre-commencement breakfast that starts at 7 a.m. for the school’s estimated 1,200 graduating seniors.

Benson Memorial Center depends on the skills of around 40 part-time students to keep the building and services running smoothly during the 127 hours it is open each week. They also help with the management of and scheduling for a satellite activities building, the Paul Locatelli S.J. Student Activity Center. That means scheduling, event setup and teardown, audio/visual services, and information services are handled by students, which is no small feat: During the 2016-17 school year Benson Memorial Center had 2,670 meeting room reservations and 1,688 lobby table reservations.

Benson Memorial Center has been noted and applauded for its 21-year-old tradition of collecting and displaying artwork created by Santa Clara students. A joint effort between the center and Santa Clara’s Art and Art History Department has led to the purchase of 65 unique originals, all of which are on display in the center. Most recent purchases are displayed for one year in the most visible portion of the building and then moved in subsequent years around the building. The program allows for the purchase of four new pieces each year.
Leave a comment
Newest on top Oldest on top
Load more comments