From the CEO: Sharing Some Lasso Leadership Lessons

One of my new favorite TV shows is Ted Lasso, which portrays a U.S. collegiate football coach who is recruited as manager (coach) of a professional English football (soccer) club (team). Aside from the nuanced cultural and language differences that are referenced, Ted Lasso instructs us, ever so subtly, in how to lead an organization. Besides sharing my Halloween costume dressed up as Ted Lasso, here are ten of my favorite Lasso leadership lessons. 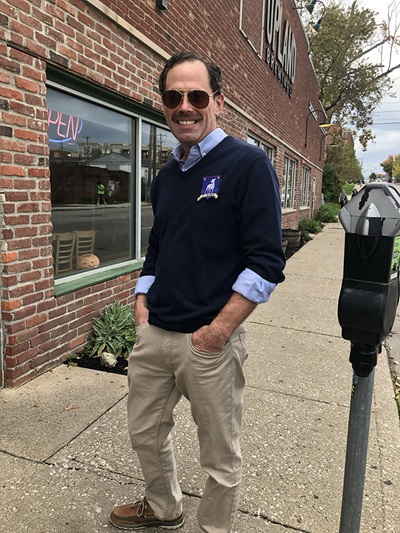 Small Stuff Matters: On his first day on the job coach Lasso provides a suggestion box in the AFC Richmond locker room. Players for the most part think this is a joke, with suggestions coming in the form of insults to the coach. However, one suggestion that notes low water pressure in the showers allows Lasso and his assistant, coach Beard, to take immediate action. It’s not huge, but fixing the showers improves morale and shows players that he cares about them. It has nothing to do with their upcoming game or strategy on the field but is step one in gaining buy-in from the team.

Biscuits with the Boss: Also early on, Ted meets first thing in the morning with team owner Rebecca Welton, bringing her tasty biscuits which she craves. She initially resists the meetings, but he is persistent, saying “we can’t be good partners if we don’t know each other.” Regularly communicating with people important to your work is essential, but what Lasso stresses is the value of getting to know them personally. No, you don’t have to be friends with your boss, but having good rapport and understanding one another strengthens your work together and the success of the organization.

Coaching is Coaching: Ted’s first press conference is a fiasco, and reporters are ruthless in their attack on his lack of experience with English football. He admits as much, saying “you could fill two internets with what I don’t know about football.” That’s less of an issue as Lasso shows us the transferable skills he brings to the position, what we would call soft skills. He knows how to work with people and to motivate them, which contributes to the team’s success. Ted has no desire or experiential framework to tell professional athletes how to play a sport they have mastered. However, that doesn’t take away from his ability to coach, to develop trust across the team, and to use the combined skills of all the players.

Be a Goldfish: Ted shares the wisdom with one of the players, Sam Obisanya, that the happiest animal on the planet is a goldfish because they have a ten second memory. This is a reminder to leaders that we need to learn from our mistakes, but not dwell on them.

Don’t Be Bothered: In appearance, Ted Lasso smiles and seems to let criticism roll off. AFC Richmond fans express their dislike of him, often calling him a wanker (you can Google it) when they see him in town or in game-day chants in the stadium. He doesn’t let it bother him and pushes forward with his plans to develop a high functioning team. Team success the Lasso way wins over the fans, who inevitably turn wanker into a term of endearment for their unconventional coach.

Be Kind: It’s hard not to like Ted Lasso, as he is kind and positive to everyone he meets. Even some of his biggest critics transform to become kinder and better people due to Lasso’s contagious behavior. Trent Crimm, a skeptical journalist, admits to rooting for Ted’s success because of the coach’s positive outlook. Rebecca admits to undermining Ted’s success, to which his response is one of understanding and forgiveness. As leaders we would do well to harness some Ted Lasso kindness and to always see the best in people.

Be Humble: The humility Ted Lasso exhibits is seen in many episodes as he reveals his own shortcomings, such as his lack of knowledge of the sport. His honesty, along with the respect he shows others, contributes to a humble approach that builds trust. He role models the idea of being yourself, of seeking advice and answers from other people.

Have Some Trick Plays: Facing a talented Manchester City team at the end of the season, Ted decides to work with his players to create some trick plays to confuse the other team. The creativity and surprise approach works well for AFC Richmond and reinforces the idea for leaders to engage their team to be innovative and to take risks.

Leaders Struggle Too: While Ted Lasso seems to always be positive and optimistic, our first signal that he is having his own personal challenges is when he experiences a panic attack. The TV show does a good job of raising awareness for mental health and the value of therapy. Viewed through a leadership lens, I am reminded of how during a crisis leaders are expected to be resilient and visionary even when, like others in the organization, they may feel overwhelmed and anxious.