Throughout ACUI’s 2021 Virtual Annual Conference earlier this month, the Association announced the winners of the 2021 awards and the recipients of the 2021 scholarships. Among the 34 winners, two universities won multiple awards: the University of Houston and California State University–Northridge.

University of Houston Assistant Vice President for Student Affairs–Student Life Keith Kowalka accounted for two of that school’s five awards, as he was honored with both a Legacy Leader Award and ACUI’s highest individual honor. the Butts–Whiting Award. To learn more about Kowalka’s career in higher education and as a volunteer with ACUI, read the news story here.

The University of Houston also received two Campus Awards, the Excellence in Innovations in Sustainability award for its Cohesive Culture of Sustainability program. The program teaches students how to practice sustainability with activities such as art creation stations for art installations and weekday lunch and learn events. The University of Houston also won the Student-Driven Program of the Year award for its Winter Wonderland! event that brought 60 tons of snow for activities, giveaways, and seasonal snacks like hot cocoa and funnel cake.

University of Houston student Zunayra Hemani received the Meg Sutton I-LEAD® Scholarship, recognizing her contributions as council liaison for the Council for Cultural Activities and ambassador for the Women’s and Gender Resource Center. Hemani balanced between learning the roles and learning how to organize virtual events, contributing to events such as Cultural Explosion, a virtual event showcasing diverse student performances, and RealTalk, where she hosted a discussion about eating disorders. 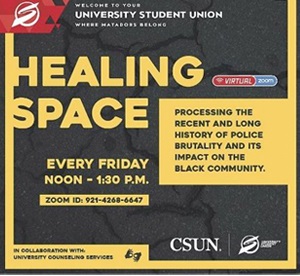 California State–Northridge’s four awards spanned the Campus Awards, Individual Awards, and Scholarships categories. A campus award, the Joseph H. Benedict Jr. Social Change Award for Racial Justice, recognized Healing Space, a collaborative program between the union’s Diversity and Inclusion Department and University Counseling Services to address various themes and systemic issues experienced within the Black community. The program launched in the wake of the murders of George Floyd and other African Americans in 2020, and was recently approved for the campus Diversity and Equity Innovation Grant to continue in the future.

Two faculty received individual awards: Dr. Marquita Gammage was presented the Distinguished Faculty Award and Dr. Freddie Sánchez was recognized with the Revis A. Cox Memorial Award. Gammage is an accomplished researcher, instructor, and author, having written the textbook Representations of Black Women in the Media: The Damnation of Black Womanhood. Sánchez has advocated for underserved and underrepresented students and communities, such as providing equitable opportunities for students at CSUN.

Student Alejandro Jimenez received the C. Richard Scott Memorial Scholarship for his work at the school’s Pride Center to promote International Pronouns Day; created and presented his Deconstructing Gender and The Importance of Pronouns presentation for the University Student Union’s training week and CSUN board of directors, staff, Greek fraternities and sororities, and students; and helped organize events for the CSUN Pride Center as a student events assistant.

A complete list of the 34 schools and individuals recognized at the Annual Conference is available at the ACUI website.