As colleges and universities enroll increasingly diverse student populations each year, they face weighing the needs of the majority with those of the underrepresented. Many campuses have an ethnic space such as a multicultural center as well as a general space such as a student union. Teri A. Kirby, Joshua A. Tabak, Maria Ilac, and Sapna Cheryan examined the benefits of ethnic spaces in higher education in their article recently published in the journal Social Psychological and Personality Science.

Existing research shows engagement, belonging, and persistence may be more

challenging for students who identify as Black, Indigenous, and People of Color (BIPOC). Campuses have responded to these disparities by establishing physical spaces for underrepresented students such as ethnic cultural centers. Although these spaces aim to provide personal growth and a sense of belonging to underrepresented students, critics argue they are underused and limit student interaction between all ethnic identities. Reductions in institutional resources, especially during this pandemic, require ethnic spaces to justify their necessity on campus to serve BIPOC. Kirby, Tabak, Ilac, and Cheryan argued that by expanding the purpose of these ethnic spaces, campus leaders can better demonstrate their necessity to a wider range of students.

Through a meta-analysis of the four studies, Kirby, Tabak, Ilac, and Cheryan found participants identifying as underrepresented BIPOC reported increased belonging, perceived value of underrepresented students by the university, support, and academic engagement when told about ethnic spaces in comparison to participants told about a general space. Participants shared increased belonging and engagement irrespective of the ability or intentions to use these spaces. This finding proved the researchers’ assertion that ethnic spaces not only serve those using the space but serve other underrepresented BIPOC across campus as a signal they belong and are valued at their university.

This work showed a physical space that does not yet exist can have an impact on students’ belonging and engagement. Building projects such as student center renovations or new builds may not just benefit students enrolled after the construction is complete. Recognizing underrepresented students can benefit from plans for an ethnic space may help to justify starting student fees earlier in the construction process.

Increased belonging and engagement for underrepresented students demonstrated physical spaces act as symbols for inclusion for the institution. “Physical spaces can thus function similarly to other cues such as diversity statements, course materials, and demographic diversity…,” they wrote. When building new ethnic spaces is not feasible, student unions should consider what physical features within their existing space can send symbols of inclusion, such as art and named meeting rooms.

The participants who identified as white reported lower belonging, support, and campus engagement when reading about ethnic spaces in comparison to reading about general spaces, although the results did not clearly show why the levels were lower. The researchers call for further investigation into the possible feelings of exclusion white students may experience when encountering initiatives serving a subset of the student population. When developing ethnic spaces or multicultural programming, when appropriate, consider involving white students in the planning process to feel included and to grow in their roles as allies.

The Call for Justification of Resources in Current Times

The recent racial unrest coupled with the coronavirus pandemic has shed light on a greater need for the safety of students on college campuses, especially those who identify as underrepresented Black, Indigenous, and People of Color. University leaders are forced to make difficult decisions with major consequences. This research by Kirby, Tabak, Ilac, and Cheryan demonstrated the importance of looking beyond the objective usage numbers to the intangible values of physical spaces. 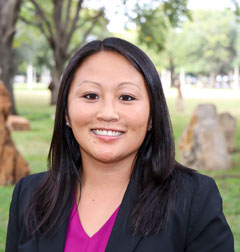 Katie Krajny Beaulieu is associate director of the Wayne State University Student Center. She earned an Ed.D. from Texas Christian University, and a master of science in education in higher education and student affairs and a bachelor of science in sociology, both from Ohio State University. She has served as the education sessions coordinator for the 2018 ACUI Annual Conference and currently serves on the Association's Research Program Team.