A Union Initiative for Taking Action in the Wake of Racial Violence: A Black Unity Room

The recent murders of Ahmaud Arbery, Breonna Taylor, and George Floyd have placed on-going racial violence into the current spotlight of American society.  As communities across the country respond with protests aimed at elevating the voices of Black Lives Matter, colleges and universities are also thinking deeply about how to support Black communities on their campuses.

As affirmed in ACUI’s Role of the College Union statement, the college union advances a sense of community, unifying the institution by embracing the diversity of students, faculty, staff, alumni, and guests. With a central focus on students, community, and diversity, college unions serve as a place of belonging for students and have a meaningful role to play in showing support for Black students, faculty, and staff, especially in a time of palpable injustice.

Many institutions are taking a step towards speaking out on systemic racism by releasing statements of support. Yet while these statements of support are a significant step in the direction of justice, many college unions continue to grapple with how to take tangible action to support Black communities on campus in the wake of on-going racial violence and inequity.

The University of Texas—San Antonio is taking one concrete step towards creating a space honoring the Black community on campus by renaming a meeting room in the student union. Using the current social climate and the call for action at the university-level as a catalyst, staff submitted a proposed idea to rename an existing meeting room. The intention behind the proposal was focused at standing in solidarity against racial injustice and actively supporting Black students, faculty, and staff at the university. The proposal outlined a plan to incorporate cultural resources such as relevant artwork and books in order to create a space of belonging.

There are already a number of college unions and institutions with dedicated cultural centers or rooms. The University of Connecticut, University of Utah, University of Cincinnati, and University of Oregon are just a few examples of universities with spaces dedicated to African American and Black culture. Following their lead, the San Antonio campus was ready to transform a space in the student union to send a clear message to the community about the union serving as a space of support and justice.

Once the idea was generated to create the space, a proposal was required detailing the full project scope, including process, timeline, and budget. The proposal was first routed through the executive director for the student union and then the senior vice provost for student affairs and dean of students. With approval quickly in place, the union was then able to move forward with the planning for the space.

The next step was gathering feedback. In order to create a community space, members of the community must be involved in the conversation. The union coordinated a meeting inviting feedback from students, faculty, and staff. Student organizations including the Black Student Union, African Student Association, and the Black Student Leadership Council were invited, as well as the executive board for the Black Faculty and Staff Council. Staff from the Multicultural Student Center for Equity and Justice were asked to lend their feedback, along with the director of the African American Studies department. 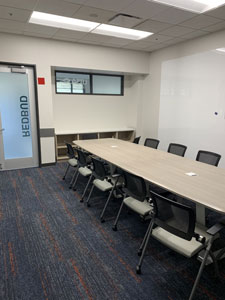 At right, a lackluster meeting room that will be given new life as a designated Black Unity Room with a library, art work, and other historical and cultural resources.

The listening session provided the opportunity for the union to hear ideas on how to name the space, what artwork would be displayed, and how to create a meaningful community library. The main consensus of the group was to rename the room the Black Unity Room, with one wall dedicated to rotating art that could be submitted by students, faculty, and staff. The participants were in strong agreement to name the community library after a recently retired administrator at the university who had a strong legacy of decades of institutional leadership. Participants suggested a short biography and photo to be included on the wall by the library. The meeting also reviewed suggested book titles, including notable titles on Black history and culture, and works addressing racism and becoming anti-racist. All of these ideas will be taken into consideration when developing plans for the space, and the group will be called upon again in the future to review designs and provide feedback as plans progress.

With universities facing certain budget cuts in the coming year, and many campuses closed due to the widespread pandemic caused by COVID-19, taking on a new project requiring funding and additional resources is an undisputed challenge.  The student union has openly shared that the timeline for the project may be delayed due to COVID-19. However, the commitment to pursuing the project is clear, and the planning necessary to develop the space can and will continue during this time of uncertainty. The space may also open with the understanding that the project can continue to grow and develop over time as more resources and funding can be allocated. For the union, the endeavor will move forward as a way to show support to Black students, faculty, and staff during a time of on-going racial violence and inequity in American society.

Many social media posts have gone viral in the wake of recent racial violence and subsequent protests. One such post from a student called on administrators that have long touted their commitment to social justice to rise up and take action in this moment of need. The refrain is simple – “Where are you now?”

As leaders in the field of education, and serving as a focal point for students, college unions across the country must ask themselves how they can show up for Black communities at their institutions. Writing statements is a step in the right direction, dedicating space for students is a strong action, and surely there are many other ways unions can come together to support the Black community and stand in solidarity against racial injustice. For the University of Texas—San Antonio Student Union, engaging in the process to create a space that visibly supports the Black community on campus is in core alignment with their mission to serve as a space of belonging on campus.  Unions must continue to ask the question of how they are showing up for students in this critical moment and can benefit from sharing action-oriented ideas with one another. 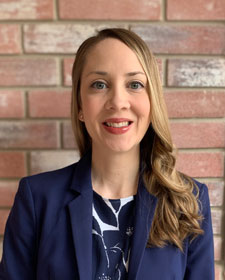 Liz Rockstroh is the senior associate director of communications and programs at the University of Texas–San Antonio. She holds a doctorate in educational leadership from the University of California–Davis and has volunteered with ACUI as a curriculum designer and faculty for the Social Media and Modern Marketing Digital Badge Course. Liz has presented on the topics of assessment, student leadership, and motivation at ACUI Region II and ACUI Annual conferences and currently serves on the 2021 ACUI Region II Conference Planning Team.