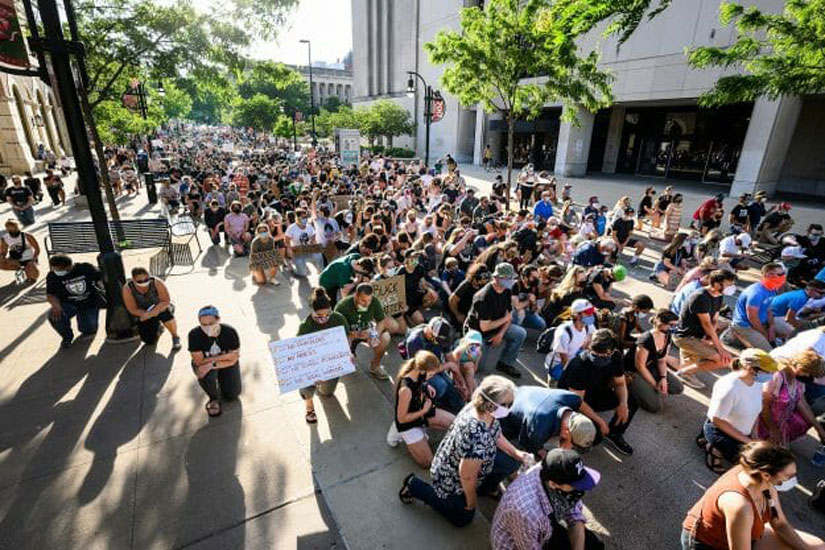 Black Lives Matter: Students, Campuses Are Central to the Movement

Just as the United States begins to reopen after COVID-19 shut the country down, communities now face another major disruption: protests in support of the Black Lives Matter movement and against police brutality. This is not a new movement, but the recent deaths of Breonna Taylor and George Floyd, in addition to the deaths of numerous other people of color in the hands of police, have inspired a new wave of international protests and advocacy.

As institutions that often support inclusive spaces and environments, universities and colleges are becoming hubs for student and community activism in support of Black Lives Matter and racial justice.

Black student unions across the United States are using their platform to reach out to local and state governments and legislators. In Washington, D.C., black student unions at Georgetown University, The Catholic University of America, and American University wrote a letter to Washington, D.C.’s mayor and police chief urging the local government to fight against police brutality, white supremacy, and racism. At the University of Nevada–Reno, black student leaders issued a joint statement to bring awareness to police brutality against minority communities. The University of Montana Black Student Union recently held a protest at the Missoula County Courthouse, and the University of South Florida student government is working with the school’s Black Student Union and other groups and organizations to address injustice and inequality.

Schools, such as the University of California–Berkeley, have organized events to discuss the impact of police brutality and systemic racism upon health. A report from Berkeley analyzed how stress from police could impact COVID-19 infection among black communities. By worsening effects such as post-traumatic stress disorder and anxiety, which also contribute to diabetes, asthma, heart disease, and more, police violence can even exacerbate COVID-19 symptoms and effects.

“Those mental health issues often go untreated in African American communities and can lead to diseases that make them more compromised to COVID-19,” said Denise Herd, a professor at the School of Public Health at Berkeley.

Despite students’ best efforts, universities have offered a mixed response to requests to change or end partnerships with local police departments. Inside Higher Ed recently wrote about this topic, citing the notable example of the University of Minnesota ending some partnerships with the Minneapolis Police Department. Some universities, such as the New York University, are physically located where the school wouldn’t be able to regulate police movement or action.

But universities continue to walk the line between collaborating with local police departments and reducing their partnerships. The University of Massachusetts–Boston announced that the Massachusetts State Police will no longer be allowed to use the campus as a staging area for protests and other events. The University of Iowa issued a joint statement with Iowa City to offer sympathy and commit to safer conditions, particularly the use of tear gas. And The Chronicle of Higher Education recently met with Carmen Twillie Ambar, president of Oberlin College; Ana Mari Cauce, president of the University of Washington; and Timothy P. White, chancellor of the California State University system, to discuss university responses as a whole.

As protests, Black Lives Matter, and anti-police brutality movements wage on, universities will likely face increasing scrutiny in their responses. Does a university cut ties or limit partnership with a local police department? Does a college use this time to review and enact change through collaboration? These are hard questions to answer, but ultimately higher education will likely commit to at least one principle: allowing Black Lives Matter and other marginalized voices to be heard.