A Classification of Collaboration Between Student Affairs and Academic Affairs

Collaboration between academic and student affairs divisions in higher education has anecdotally been referenced as an innovative way to improve student success, writes Kim C. O’Halloran, the associate provost and dean of graduate studies and extended learning at Widener University, in College Student Journal. There is, however, no research measuring and describing its many forms, so in “A Classification of Collaboration Between Student and Academic Affairs,” O’Halloran sets out to do that.

Using a cluster analysis program called Clustan that measures similarities, forms clusters, and determines the number of clusters in a final solution, O’Halloran was able to place 195 higher education institutions in 10 unique clusters, which was then reduced to five based on scoring variables that were indicative of degrees of similarity and dissimilarity. The smallest cluster contained three institutions, the largest contained 52, and the majority contained between 15 and 30 institutions.

The two most cited reasons for collaboration identified through the survey responses were “to enhance academic performance” and to “increase retention or persistence.” Together, they made up 81% of the highest-ranked responses, and were followed by “increase sense of community on campus,” at 11%.

O’Halloran identified barriers to collaboration that previous research has uncovered, including the recognition that most institutions have no system in place for rewarding faculty and student affairs professionals that engage in collaboration. For faculty, collaboration is often devalued in comparison to research and teaching, with the opposite true in student affairs: Scholarly activity is devalued and recognition is based on evaluation and performance in meeting student needs. Other barriers include:

Cultural norms created around a historical and structural separation of formal and informal curricula and with student affairs often being viewed as ancillary, can serve as barriers institutionalized beyond individuals and departments.

Identifying Support for and Identifying sources of resistance to collaboration

Competition for resources, particularly financial resources, can increase instances of territorialism and ownership, even though it’s often recognized that collaboration can reduced costs and eliminate redundancies. 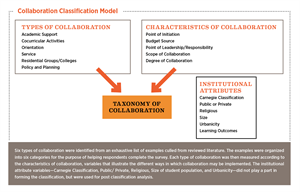 O’Halloran noted that existing research uncovered three factors that contributed to successful collaborative experiences between student affairs and faculty: the existing structure and resources, support from leadership, and a common understanding of the educational experience.

Developing structural partnerships that include representatives from both academic and student affairs roles and that are designed to address numerous issues likely to outlast specific issues or individuals will be more likely to succeed. Individual and departmental partnerships are a requisite, but it’s structural partnerships that ensure long-lasting and institutionalized collaborative frameworks. These types of partnerships foster inclusive cooperation as they most likely require a linking of varied resources like space, time, finances, technologies, and staff.

It’s not enough for institutional leaders to call for increased collaboration between academic and student affairs, they must serve as models as well if collaboration is to become an institution-wide innovation. “This may include changing evaluation mechanisms to measure levels of collaboration and modifying reward systems,”
she noted.

Classification of Collaboration Between Academic and Student Affairs

This cluster includes institutions that tend toward strong academic affairs leadership in almost all collaboration activities. Partnerships are collaborative (significant involvement of both academic and student affairs professionals) and exist throughout the organization. Student affairs led only for residence life activities with advisory relationships (one area is responsible and other is involved to a lesser degree) between departments.

This cluster includes institutions that tend toward a split of leadership roles for collaboration along traditional functional lines, yet was marked by stronger collaborative leadership from academic affairs. Academic affairs led in academic issues through collaborative relationships across the organization, while student affairs led in traditional student affairs functions through advisory relationships across departments and curriculum supplemented activities such as freshman interest groups and residential colleges, through minimal collaboration between Individuals.

O’Halloran did determine aspects of the study inconsistent with the goals of academic and student affairs collaboration that was recognized in the literature. First, she noted that partnerships are sometimes more advisory than collaborative (Cluster Five), and more department-focused than organization-wide (Cluster Three). And in a small number of cases (Cluster Three), collaboration is minimal and only takes place between individuals.

“There were more than 50 institutions where the strongest collaboration activities between academic and student affairs were being initiated and led by academic affairs. This finding is especially interesting since the survey reflects the perception of the chief student affairs officers who completed it. Considering that leadership support at the uppermost levels of the institution was cited in the literature as an important factor for innovations in collaboration, chief student affairs officers did not perceive that they or members of their division staff were taking the primary leadership role in collaboration activities, and this leadership role was instead assumed by their academic affairs colleagues,” O’Halloran noted.

O’Halloran finally determines that where collaboration is taking place in meaningful ways, it is taking place through leadership across traditional functional lines, and through primary leadership by academic affairs. She recommends that: