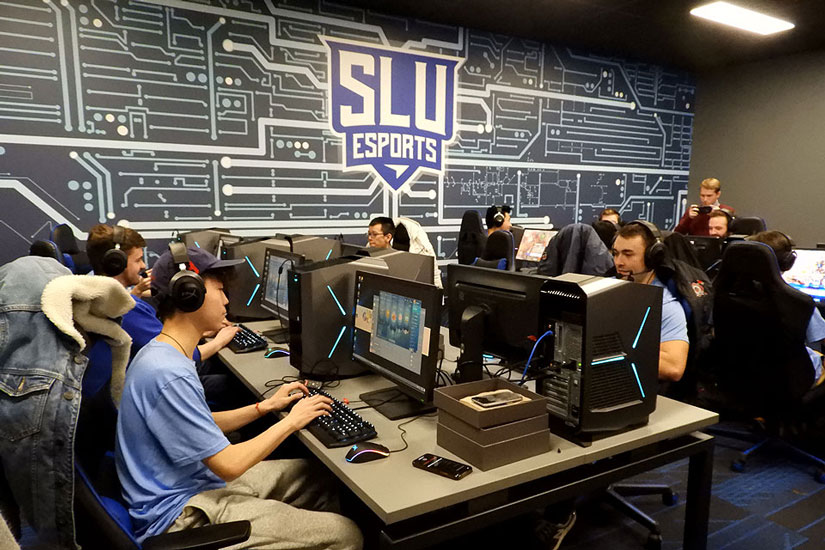 A New Sports Future: Student Unions and the Rise of Esports

In the summer of last year, thousands from around the world gathered at the Arthur Ashe Stadium in Queens, New York. They came to watch 200 individuals—qualifiers from a group of more than 40 million—compete for a $30 million in prizes. A 16-year-old went on to take the top prize of $3 million. Was this a new NFL or NBA competition for younger players? Or a spin-off championship for soccer to boost its momentum in America? No. This was the Fortnite World Cup, one of the biggest esports competitions yet.

Esports have quickly taken the world by storm, notably on college campuses and in student unions. Young kids, teenagers and early adults regularly compete in games like Fortnite, Super Smash Bros., League of Legends, Dota 2, and many more. Much like other sports, players can get recruited by teams and receive sponsorship deals. And as evidenced by the Fortnite World Cup and other global competitions, esports aren’t just a passing hobby either; they can be a life-changing passion and pursuit.

Student unions around the country have already begun creating or expanding upon esports spaces. Last month, The Bulletin reported on the University of Alaska–Anchorage’s Esports Lounge at the university’s student union. The lounge is 1,250 sq. ft., hosting 18 high-end PCs and several video game consoles. The esports lab at the Charles J. Wick Campus Center at Daemen College is a 24/7 game center for students, and Perkins Student Center at the University of Delaware opened its new esports arena in February, and month earlier a new gaming lab (pictured above) opened in Saint Louis University's Busch Student Center.

Oakland University last December became the first Division I university in Michigan to announce a varsity esports team and competitions will begin later this year. Glenn McIntosh, vice president for student affairs and chief diversity officer, said being a leader in esports would provide numerous benefits for the entire university.

“We will have the elite esports athletes, room for many more recreational esports participants and engage new fans of the team,” he said. “In many ways, esports will provide another avenue to help our students get connected and engaged on campus. We know once they get plugged in on campus, it leads to more student success in academic pursuits as well.”

Other student unions are also building or developing their own esports spaces. Construction has begun on an esports arena at the Plaster Student Union at Missouri State University, the student union at Florida Atlantic University will open its esports arena next month, and an esports lounge and gaming arena is in development at the Erb Memorial Union at the University of Oregon. At East Tennessee State University students can earn a graduate certificate in Esports Management and tryouts are underway this semester for a new esports team that will compete out of the D.P. Culp Student Center. Illinois State University’s Division of Student Affairs said it will renovate Bone Student Center’s bowling and billiards center by this fall to establish a new esports center.

Universities and colleges are launching their own esports teams or partnering with established teams and game developers as well. The National Association of Collegiate Esports formed in 2016 when there were just seven varsity esports teams in the country, but the number had grown to 63 by 2019, and is expected to top 100 this year.

Esports is still a young sports industry, especially compared to the collegiate sports such as football, basketball, gymnastics and others that have been at universities for decades. Students recruited for esports had more than $15 million in scholarships from nearly 200 colleges up for grabs in 2019 and that pace is not expected to slow anytime soon.

ACUI will organize two educational sessions about esports at the 2020 ACUI Annual Conference in Atlanta, Georgia. The first, “Esports: The Corner of History and Progress in Student Engagement,” will be held on Monday, March 16, from 10:15 to 11:15 a.m., in M101, Marquis Level. On Tuesday, March 17, guests can attend the “No Longer in Your Parent's Basement: Esports and Gaming as a Model for Community Development, Career Opportunities, and Competitive Teams” session from 2:00 to 4:15 p.m., in M302-M303, Marquis Level. Visit the ACUI website for more information.