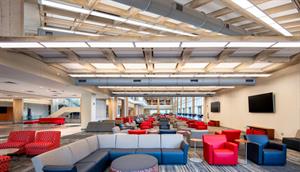 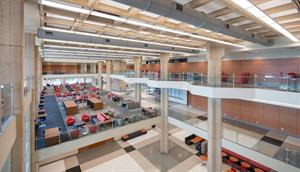 Built in 1977 when the University of Mississippi had but 9,000 full-time students, not the 23,000-plus it has today, the Ole Miss Student Union was bursting at the seams. The food court was overflowing, students were sitting on the floor in the lobby, and student organizations could not find enough space to meet in the union. It was in 2009 a student union planning committee began looking at a programming analysis and some preliminary planning concepts, which was followed by team members and students visiting student unions around the United States, with the focus on successful renovation and expansion projects.

An initial challenge, everyone realized, would be that the footprint of the existing union was landlocked between roads and buildings that weren’t going away. Students still loved the existing union and its services, so the charge was to think outside the box while staying within the space, reflecting some of that past history, and improving space and ambiance. They were looking for some “wow” factor in a renovation, but realized it would come at a price: vehicle traffic outside would be restricted, pedestrian traffic limited, student organizations and administrative offices would all have to move. It looked like it could be a tough four years, from when work started in July 2015, to a new opening in 2019. 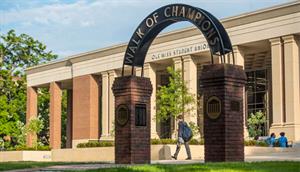 “From class changes and commencement, to game days in the fall, the scope of the project impacted the campus community more than could be expected,” recalled Union Director Bradley Baker.

But through the stress and the strain, the “wow” eventually arrived in the form of nearly 100,000 square feet of newly renovated space and another 76,000 in new space that included a food court and overlooking loft, a new transit center, a 15,000-square foot ballroom, and an auditorium, plus lots and lots of tech. Projection screens and televisions abound, and every meeting room has audio-video capabilities. LED lighting and room occupancy sensors were installed, a 40-foot-high glass frontage brings in available light, and existing skylights were renovated as others were added.

This was all done while keeping in mind a campus-wide architecture scheme that includes exterior columns and big front porches, both of which were trademarks of the existing union. In keeping the columns and the front porch, the project team was able to maintain a campus-wide design connection, while making improvements like the 30-foot overhang above the porch, designed to shade the area in summer months.