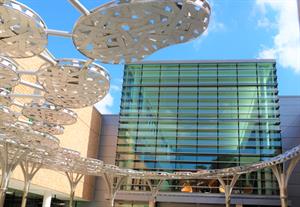 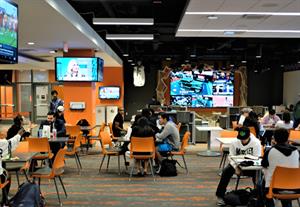 It’s like Ray, in the film “Field of Dreams,” says: “Build it and they will come.” At Sam Houston State, every time they built, more students came, and that’s especially true of Lowman Student Center. Built in 1963 to serve an enrollment of about 5,500, it was but 20 years before enrollment hit over 10,000 and an initial renovation and expansion was needed. By 2000 enrollment had hit 12,000 and a second expansion was completed; 12 years later there were 20,000 full-time students at Sam Houston and planning began for a third expansion that would be supported overwhelmingly by students agreeing to an increase from $60 to $100 per semester in their student center fee. Those same students were also involved in pre-planning discussions, decision-making rounds that included members of student government and the Lowman’s student advisory board, and in open forums and surveys that helped determine flooring, furniture, paint schemes, and technology.

With a grand opening in January 2019, the latest look of the Lowman Center gives visitors more conference, event, and dining space. Speaking at the grand opening, Student Body President David Eller said it was a great day for all Sam Houston Bearkats.

“It signifies a new chapter of growth here at Sam Houston,” he said during the January 15 event. “It has only been open a few hours but you can already see a lot of students everywhere, interacting, and having a good time with other Bearkats. This is the living room of campus, so it is about finding new friends and making memories here at Sam Houston State.” 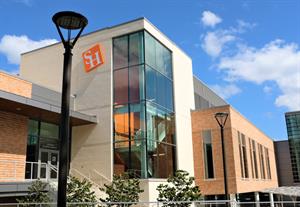 Nobody appreciated the added space more than campus student organizations, which were responsible for a 106% increase in events at Lowman over the previous year. In general, foot traffic also skyrocketed, up 75% in the fall semester, and up 65% during the spring. At least partly attributable to the boost in traffic were new restaurants, an eight-lane bowling center, a new games room with tournament-size tables, a performance space, and a pub called the Three Horse Tavern.

Students, student organizations, and guests also benefit from an advanced, flexible, and high-quality audio-video network. A video switching system allows for routing signals to any projector or television in the facility, advanced uplighting and rigging systems were installed in the ballroom, and bring-your-own-device televisions in lounge areas are being used by a widening variety of constituencies for academic work, recreation, and event marketing.