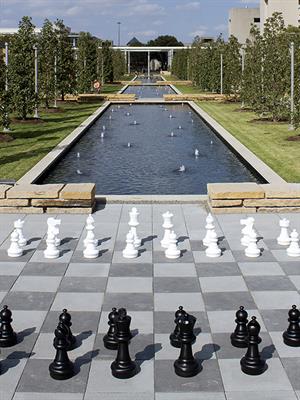 
The University of Texas–Dallas was but 10 years old when students voted to pay for their first student union, by referendum, in 1979. Two years and $4 million later its doors swung open, and today, nearly 40 years later, six of 10 students say it is their favorite place to hang out. 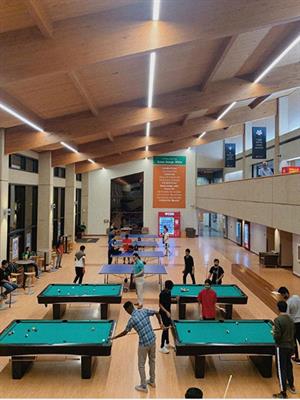 The main union has one of only two food courts on the campus and consists of eight retail dining options, plus a Starbucks and a full-service pub. There’s a movie theater, six billiard tables, four table tennis tables, and a varied array of common spaces for socialization throughout the three buildings. All of the building operations and services are funded solely from student fees.

It also serves as a high-functioning meeting and event space with seven meeting rooms for student organizations, three ballrooms that combined can hold up to 300 people, and a state-of-the-art auditorium that can hold over 500 people in the student services building. The complex saw over 600,000 visitors during the 2018-19 school year.

Signature events include Weeks of Welcome, homecoming, and a semester-ending week of events called Stressbusters. It’s host to two pop-up art shows per year where students submit their own art and winners have their work featured in the building for an entire semester. As the primary venue for student organization and department programming and events, the complex hosts nearly all cultural, religious, political, spirit, and student engagement events.

Making it all possible, Director Dan Goodwin says, is a team of student employees who serve as “the key cog of our operation.”

“As opposed to other departments where event staff and operations staff are separate, we train each and every single student employee to be able to do both jobs,” he said. “They are our frontline faces for the operations and setups of all of our events, and in an average year our students will have set-up over 5,000 meetings and events. Our students also take the lead in our recruitment, hiring, and training of their fellow student employees. This is an important learning outcome and prepares our student employees for their own professional work searches.”

The union complex also features two large common outdoor spaces that serve as a vibrant space for student events and free expression. Since September 2019, Goodwin noted, these expressive events have increased in number, providing students with ample experience in managing both spontaneous and planned activities. If need be, staff and students work with both the dean of students office on resource management and with university police department if there’s a need for security assistance.