Are You Looped Yet? As the U.S. Catches up with Europe, More Event Spaces Install Hearing Loops

Yankee Stadium has it, as does Los Angeles International Airport, and the Metropolitan Museum of Art. With student unions, one of the latest was University of Nebraska–Kearney’s Nebraskan Student Union, which has installed a specialized hearing assistance system called a hearing loop it its Antelope Room conference space.

The University of Wisconsin–Oshkosh’s Culver Family Welcome Center, considered a campus and community crossroads for events and  conferences, has hearing loop technology installed, as does the new Ent Center for the Arts, a 92,000-square-foot performance space at the University of Colorado–Colorado Springs. And in Rochester, New York, considered the most deaf-friendly city in the United States, Rochester Institute of Technology has hearing loops installed in its student alumni union and in the interfaith center on campus. 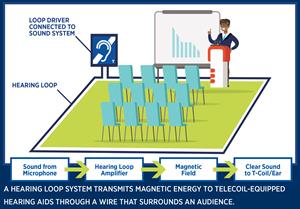 Considered clearer, sharper, more accessible, and in the long run, cost-effective, hearing loop systems use a copper wire usually installed in the floor to electromagnetically transmit a signal directly into a telecoil in a person’s hearing aid or cochlear implant. The hearing aid or implant does need to have a telecoil built into it to receive the loop signal, but about 80% of all devices sold today now have a telecoil, or t-coil. Audiologists in the United States have typically not talked to customers about t-coils due to the low number of hearing loops in use, but that’s changing. As Americans have traveled to Europe and used loops installed in places like Westminster Abbey, most concert venues and theaters, places of worships, and even taxis, awareness has slowly increased.

It’s like a wireless loudspeaker linked directly to the sound source in the room, be it a microphone, theater speakers, radio, or other transmitting source. On a small scale they can be installed into reception desks or business counters, or entire room loop systems can be built into auditoriums, lecture halls, theaters, or meeting rooms.

The systems can increase one's comprehension from 0-10 % to as much as 90 %, according to the Hearing Loss Association of America. Most loop systems consist of a copper wire running around the perimeter of the room, but in larger venues multiple wires can run throughout a building, creating a variety of listening areas. Each loop area is then delayed, or time-aligned, to keep the sound coherent and synchronized. There are also portable room loops that are usually provided in a carry case and come in the form of a perimeter loop.

Other means of providing hearing assistance include portable t-coil devices that work like mini hearing loops. Users can wear the portable t-coil around the neck and pick up the signal from the hearing loop, which allows a person to be in sections of a space outside the installed coverage area. Many public venues also provide FM radio frequency transmitting systems which allow people to check out a receiver and an ear set or earphone.

The Hearing Loss Association of America does note that hearing loops are now the preferred assistive listening system for the majority of people with hearing aids and cochlear implants. They are considered easier to use, offer better quality sound, are discreet, offers better hygiene (no borrowed headsets or ear buds), and versatile. In 2015 the World Health Organization estimated that about 360 million people, including 32 million children, have moderate to profound hearing loss. That’s roughly 5% of the
world population.

Hearing loop proponents say that while the cost may be higher than other alternative listening systems, they provide access to more people, offer greater satisfaction, and are easier to administer and maintain. Cost can vary, from $500 to $1,000 to loop an information desk or ticket counter, up to $4,500 for small conference rooms, and as high as $150,000 for stadiums and large performing arts centers. Costs are generally lower when loops are installed during new construction or renovation projects.