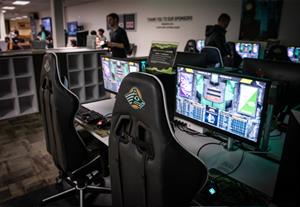 The esports market was expected to hit the $1 billion revenue mark in 2019; public high schools are hosting multischool competitions as catalysts for learning, career development, and socialization; and this past year nearly 200 colleges collectively offered about $15 million in scholarships to esports players. So when esports players started gathering of their own volition in an unused space in the University of Alaska–Anchorage Student Union it didn’t take union administrators long to see an opportunity. 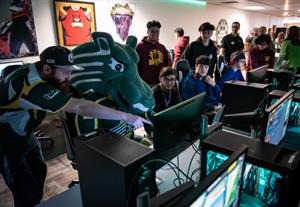 Pulling together buy-in from existing student gaming organizations like the Esports Club, Super Smash Brother Club, the Fighting Games Club, and the Tabletop Gaming Club, professional staffers worked with students to formalize the space for esports, review dozens of project drafts, develop baseline specs for equipment bids, and then go out and conduct sponsorship pitches. Students and staff considered inclusive accessibility from the start, and when the project was complete there were multiple ramps in and out of space, an American Disabilities Act-approved gaming station similar in appearance to all other PC stations, and a supply of accessible gaming equipment for free checkout so no one had to provide their own.

“Those involved feel they have left a legacy here in the building now,” said Union Assistant Director Cody Buechner. “This filled a need for student engagement that wasn’t already being fulfilled in another way. As you walk past you can see the student engagement happening both in person and through the gaming. It’s exciting to see the happy faces of students every day because they have a small part of campus they can call home.”

It’s also seen as a recruiting tool for area high school students since Alaska sanctioned esports as a high school activity last year and the union lounge is the only non-profit in the area that had the resources to provide the right equipment for those student players. “It brought new energy to the building, increased traffic through the doors, and helped develop a new partnership with high schools that will benefit our recruitment and retention efforts,” Buechner said. 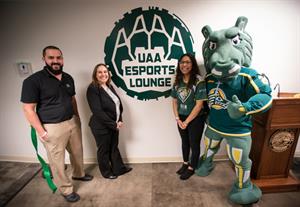 The space was upgraded from 1 to 10 gigabytes of storage, and there are 18 high-end PCs, a PlayStation 4
with accompanying virtual reality headset, an Xbox One,
and two Nintendo Switches. There are more than two dozen games on hand, including competitive multiplayer games like League of Legends, group party mainstays like Fortnite, and single-player experiences like Minecraft. Club members and staff even went public to pitch the project and eventually received sponsorships from local organizations including Resource Data and the Alaska Army National Guard.

To use the lounge, visitors first create an account at the student union information desk and use is free for students enrolled in at least three credit hours. UAA staff, faculty, and the general public are also welcome to play for a small fee, and the space is also open to high school esports teams.