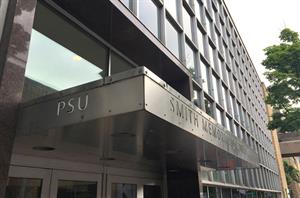 Looking out the ceiling-to-floor windows from Smith Memorial Student Union’s second floor student lounge you can see history: Portland State University history, U.S. history, world history, and a community’s history, all in the form of the South Park Blocks. Dedicated in 1852 as Portland’s first official greenspace, it’s been the site of protests, rallies, and festivals that have attracted tens of thousands of people. The Saturday farmers market alone draws 14,000 every weekend.

The South Park Blocks also provide the ambiance for some of the most popular places for students to gather on campus, that being Smith Memorial’s cultural resource centers. The union houses the majority of the resource centers on campus that serve marginalized populations, and they’ve become a safe space where students share their personal stories about finding community and a sense of belonging at Portland State. Just outside the resource center spaces, students commonly gather in that student lounge overlooking the park blocks. 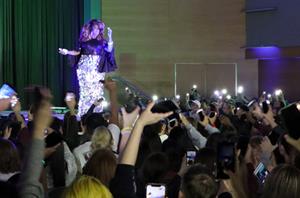 In the past three years the union has seen an increase in the number of resource centers housed in the building, and each has brought new life and vitality to a building that was constructed between 1957 and 1965 in four stages, with each stage representing the completion of one corner of the current union.

In many ways 1965 was a defining point in Smith Memorial’s future. That was when the former Portland State College had a student team competing in popular GE College Bowl, which attracted as many as 20 million television viewers each week. Considered an underdog, Portland’s trivia team was crowned national champion, and among the team was student Michael Smith, who had competed while suffering from cystic fibrosis. Despite appearing in all five games, Smith was frequently hospitalized during the nine months of preparation for the college bowl. Following his premature death in 1968, the Smith Memorial Student Union was renamed for him.

The union is also the hosting location for over 40 annual marquee cultural awareness programs every year. Created and hosted by international students and alumni with the assistance of union staff, the annual programs share culture and tradition while developing campus community. 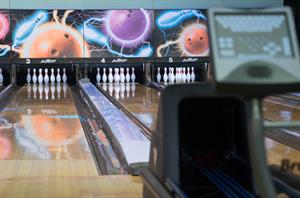 Being adjacent to the South Park Blocks has meant that the union has access to a large greenspace that may serve as a commencement site or outdoor festival, but also as the location for protests and controversial events. Protests during the Iraq War drew over 20,000 people on several occasions to the blocks, and smaller events have taken place in the union.

“As a gathering space for all students on campus, we have had several instances of protests and controversial events. All of our staff are trained to have an understanding of freedom of speech and First Amendment protections, and to understand that our role in the union is to support events, ensuring their success, no matter the content,” noted Randy Mishler, marketing and communications coordinator for the union’s conference and event services office. “We work with event planners beforehand to ensure that proper safety and security measures are in place, and that Smith staff have as much knowledge about events as possible. We also work with students, student groups, or campus departments wishing to host counter events, and we facilitate those events in the same way.  Portland State and Smith encourage open and intelligent dialogue among our students and work with all users of the building to make sure their messages are heard.”