Transience can be a double-edged sword for student union and student organization professionals who work with student volunteers. On one hand there is always a steady stream of new recruits entering the undergraduate pool, yet on the other students are time-bound within their degree program. That transience can create gaps in volunteer roles that require a greater depth of knowledge, experience, or engagement.

To better understand the impacts of transience within student volunteer organizations, and particularly student-led organizations, and to make recommendations on how to organize in order to withstand high volunteer turnover rates, researchers from the United Kingdom and Sweden conducted interviews, workshops, and discussions over 2.5 years with student volunteers working in student-led food gardens at three universities. 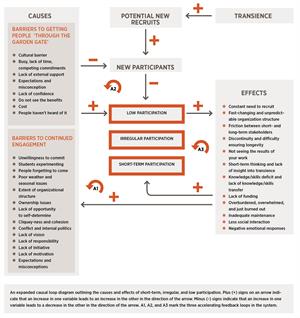 What they identified were a variety of barriers to both initial participation and continued engagement that included cultural barriers, available time, autonomy versus structure, cliquey-ness, and a lack of shared vision. They also noted a variance in the way short-term stakeholders (students) and long-term stakeholders (staff/Ph.D.) viewed transience as a problem—“Akin to the different perceptions of time in temporary (linear) and permanent (cyclical) organizations.”

The authors note that much of the existing literature on student transience focuses on how student mobility affects individuals and the more permanent and non-university communities where they move. With student volunteerism an integral part of the student experience, they point out the need for a better understanding of student-led initiatives and to explore the internal realities of student-led organizations. Rather than focusing on reducing transience itself, insights in the work focused on how organizations with inevitably transient populations managed the challenges of short-term participation and how some of those challenges could lead to positive outcomes by contributing to student learning.

In systems theory the world is “a complex, interacting array of systems and system processes, bumping into each other in a variety of ways. Social relationships and processes are impacted by the physical world as the physical world is transformed by social activity,” the authors note in referencing Morten Levin and Davydd Greenwood’s book, Introduction to Action Research. Systems theory uses feedback loops, when the output of a system is reused as input into the same system, and here the authors looked to understand and identify feedbacks, “especially accelerating feedbacks, given that unchecked accelerating feedback loops ultimately destroy the system they are part of.”

“We understand each student-led food garden as a semi-open, complex system interacting with their host university, students’ union, and national student union organizations, while operating within the sustainability of the higher education community,” they wrote.

After conducting six workshops, 16 interviews, a fishbowl discussion with 17 participants, and a virtual teleconference, all involving students, student union staff, elected representatives, and staff from the National Union of Students, three accelerating feedback loops were identified:

Still, there was evidence of an opportunity to capitalize on having long-term and short-term stakeholders and in turn retain knowledge within the program and maximize student learning. Specifically, they identified two “opportunities in disguise.”

Temporary organizations and organizations with high transience often suffer from organizational amnesia, or the failure to retain knowledge. But an aim of any organization is that students learn, regardless of whether learning is reinvested, so while transience may cause difficulties, it may also provide learning opportunities for students. “If students have unrealistic expectations and misconceptions of what a student-led food garden can do, taking part in one can help them better understand what a voluntary, self-organizing initiative can offer,” the authors wrote.

A second “opportunity in disguise” came in the conflict and mistrust identified between short-term and long-term stakeholders. Citing work on student volunteering in higher education by Clare Holdsworth and Jocey Quinn noting that “the most valuable form of volunteering provides learning opportunities which enable volunteers to deconstruct and resist power structures and inequalities,” they noted that students interacting with staff were faced with such opportunities.

In addressing barriers to getting students initially involved and keeping them engaged, they first suggested a reexamination of the role of university and union staff. Some students, they noted, said they would have liked more guidance, and past research has shown that students supported by staff have better experiences of volunteering than those not supported.