Counseling and wellness centers on college campuses continue to experience significant increases in requests for services; the Center for Collegiate Mental Health reports a 30 percent rise over five years. One accessible service shown to reduce anxiety and stress is an animal-assisted therapy program. Whether held indoors or outside, student unions often partner with student wellness programs, local animal shelters, and student organizations.

Three University of California campuses—Davis, Riverside, and San Diego—host Therapy Fluffies at their student centers. At a Price Center ballroom on the San Diego campus, more than 20 certified therapy dogs hung around for four hours one day. The student well-being lounge, The Zone, also allows the public to reserve times to spend with the dogs. 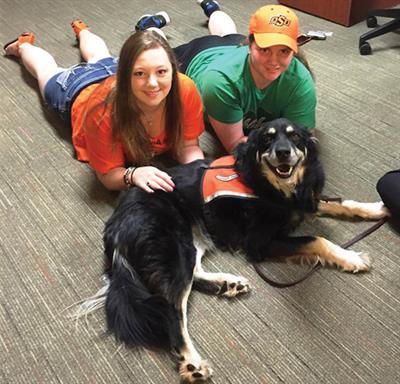 Hundreds of campuses hold these events, quite often leading up to the week of finals, but they are also becoming staples of wellness fairs, orientations, and other large events. Taking the idea a step further, some programs are becoming fixtures on campus and beyond.

Pete’s Pet Posse was started in 2013 as a pet therapy program at Oklahoma State University (OSU); teams made up of dogs belonging to the families of university employees and health counselors are made available to faculty, staff, and students at various locations throughout the year. The Reboot Center in the OSU Student Union is designed to offer a relaxing and supportive environment for learning skills to improve stress management, performance, and well-being, and it is the host site for Pete’s Pet Posse every Thursday at Noon.

“Pete’s Pet Posse is a pro-active pet therapy program, not a reactive dog therapy program,” said Dr. Lara Sypniewski, the Henthorne Clinical Professor of Small Animal Medicine at OSU’s OSU Veterinary Medical Hospital. “Most programs bring in therapy pets only during high-stress times like finals week. At OSU, we know there is always anxiety on any campus, so our program has dogs and their owners or handlers strategically deployed across the campus to be prepared when the need arises.”

Pete’s Pet Posse has over 40 dogs associated with trained handler teams who work together to help students, faculty, staff, and campus visitors overcome emotional and stressful situations. In one case, Pete’s Pet Posse was called to help in 2014 after a student and sorority member was killed by a drunk driver. The dogs were placed in the sorority house.

Like Oklahoma State University, Kent State University’s pet therapy program is unique because it is campus- and community-wide and takes place year-round. Kent State researcher Kathy Adamle started the Dogs on Campus program in 2005 with five dogs; today, the program has 26 dogs that have conducted over 100,000 visits.

A growing body of evidence shows that therapy dog sessions can have strong, immediate benefits, reducing stress and increasing happiness and energy levels. Even single, drop-in sessions like the ones most common at student unions “have large and immediate effects on students’ well-being,” wrote University of British Columbia researcher Emma Ward-Griffin.

These singular events can also become unique fundraisers for student organizations and local animal shelters. Talley Student Union’s Stafford Commons is the open-air site for North Carolina State University’s Puppy Palooza, a combination fundraiser and destresser that partners student organizations with a local animal rescue operation. By paying $3, students can play with dogs and puppies for as long as they wish during the two-hour event.

At Dunn Meadow, Indiana Memorial Union’s expansive front yard, a similar event has gone on since 2012. Called Rent-A-Puppy, the annual event is cosponsored by a campus ministry and an animal shelter and allows students to play with a puppy for 20 minutes after making a $5 donation.

Another benefit, researchers have found, is that the visibility of dog therapy events can raise awareness about other wellness and counseling programs on campus. In a 2015 study, West Chester University researchers Rachel Daltry and Kristin Mehr found that 94% of students surveyed stated that they would not have stopped at a counseling information table if the therapy dogs had not been there.

“So perhaps using animals may be an effective way of getting college students to seek therapy in the first place and to stick with it after they begin,” they wrote. “In addition, the mere presence of animals may encourage students to visit counseling centers or even their professors' offices.”