The Sonoma State University Student Center will celebrate its fifth anniversary on November 13. The morning will kick off with giveaways, including donuts, coffee, and fresh fruit, along with information about the amenities and services available within the facility, which still maintains that “new” feeling five years later.

The Student Center has all the expected union amenities: state-of-the-art meeting rooms and ballroom, a huge multi-story central lounge with a fireplace, the University Store, a multicultural center, banking services, and offices for student government, student organizations, and programming. The third floor is mission control for student affairs. And then, of course, there is the food. 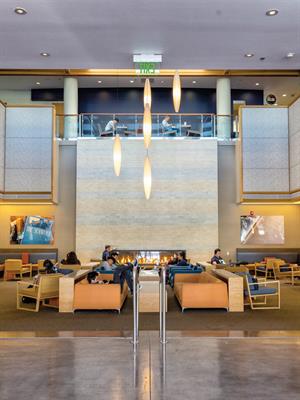 With nearly 19,000 square feet dedicated to culinary services, the traditional dining experience was re-imagined to include multiple stations that feature a variety of foods. The main residential dining room offers seven stations, ranging from an innovative Chef’s Demonstration Kitchen to Passport, a station featuring items from different countries. In addition, there is a grab-and-go restaurant, a pizza place, a coffee shop, and more.

Programming is at the forefront for Sonoma State University students and the second-floor multicultural center, called the HUB, is home for programming and discussions about social justice, diversity and inclusion, identity and ethnicity, and race. A recent example was the open discussion on the topic of “It’s a Guy Thing.” The casual conversation afforded students an opportunity to discuss the role of masculinity in current culture.

Escape rooms were recently created within the union, offering different themes and challenging students to think in different ways and to use communication and teambuilding skills. The escape room challenges have become an avenue for building community and creating new traditions, with more than 550 students attending the five-hour events on Thursday and Friday nights.

One of the largest ballrooms in Sonoma County is found in the Student Center and can host events for more than 1,000 people, and the 12,000-square-foot space can be broken up into five smaller meeting rooms. The ballroom has played host to large community events, such as Mi Futuro esta en Carreras de Salud: My Future is in Healthcare Careers, a symposium for youth to introduce careers in mental health and primary healthcare.

A two-story central lounge is where most students gather and study, but many are drawn to the outdoor seating found in the adjoining plaza, a popular location for large campus events. The largest event of the year is Big Nite, organized collaboratively by Student Involvement Programming, the neighboring Recreation Center, and Associated Students. The semester kick-off event includes carnival rides, an outdoor DJ, indoor live performances, crafts, virtual reality games, and more.

“It’s a great event held on Sunday night right after everyone has moved in at the start of the semester,” said student center director Jessica Way. “It’s how we welcome the students back.”