It was April 1 last year and Chuck Faulkinberry, director of the John J. Hemmingson Center at Gonzaga University, was worried: The nearly new student center was shaking, floors swaying, under the exultations of thousands of Zag basketball fans known as the Kennel Club. For the first time in 20 NCAA tournament appearances, Gonzaga was going to the Final Four, and if you weren’t at the game being played in Arizona, chances are you were at Hemmingson Center. 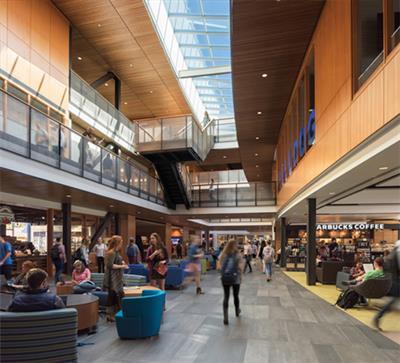 Giant monitors had been set up along the grand atrium known as Main Street in the Hemmingson, and each time Gonzaga advanced in the tournament, the crowds had grown larger for the next game. Eventually, the building was nearly standing room only, with fans on each of the building’s four levels.

“Frankly, we were a little worried that all of the jumping and yelling would put undue stress on a facility not really built for that kind of activity,” Faulkinberry recalled. “But the building held up marvelously, and our student body now looks forward to watching games in this space as a community.”

“Community” is a constant at Hemmingson. Just two months prior to that basketball game, staffers at the center were expecting 500 people for a World Relief Spokane event about immigration and refugee issues. Instead, 1,500 came out, the ballroom was packed, and overflow guests had to be accommodated in additional spaces.

“This is a learning building, not only for what happens here when people gather and meet, but because the building itself teaches. Engineering elements, sustainability features, and community connections are front and center for all who visit here,” Faulkinberry said.

LEED Gold-certified, the center uses a unique mechanical system that accesses geothermal heating and cooling through water via a sealed well located on the east side of the building that accesses the Spokane Valley-Rathdrum Prairie Aquifer. The system maintains indoor temperatures of between 59 and 70 degrees Fahrenheit, depending on time of year, and the water is never touched by human hands before it is reintroduced back into the aquifer via a second well at the west side of the building.

An innovative hydroponic greenhouse on the second floor near the main dining hall provides fresh produce, and rooftop apiaries not only produce honey, but also allowed Gonzaga to become the first university in Washington and the first Jesuit university in the United States to be certified as an affiliate in the Bee Campus USA Program. Faulkinberry himself is a beekeeper, and the project is supported by faculty, students, and professional staff members from throughout the campus.

The facility, the community, the dining, and the student and professional staff are why Hemmingson has been voted the most popular place on campus for each of the three years it has been open, and while still young, it underwent an important renovation just last year.

“There was a need to add a place where students could take a step back and relax in an area that feels comfy and cozy,” Faulkinberry said. “It’s appropriately been named the Hemm Den.”