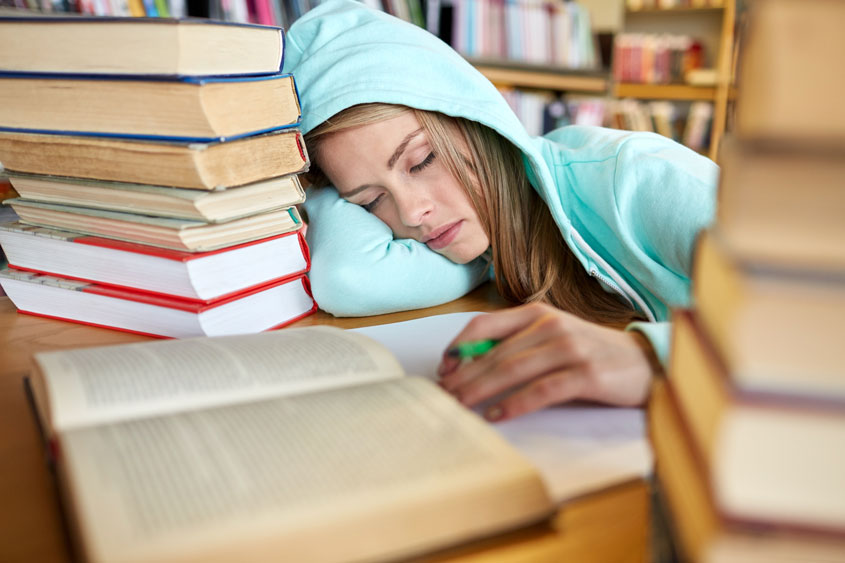 Too Much Of A Good Thing: Understanding The Perils Of Overinvolvement

Student involvement scholars have long posited that as students become more involved, greater social and academic outcomes accrue. However, as many student affairs practitioners can attest, some students are so highly involved, they experience challenges with their physical health, emotional well-being, academic performance, and interpersonal relationships. Previous studies on student involvement and engagement, like those by Alexander Astin and George Kuh, have used quantitative measures to show the relationship between a student’s level of involvement and achievement of positive educational outcomes. Few published studies consider the questions Astin posed in his 1984 Journal of College Student Personnel article regarding the possibility of diminishing returns for students investing an exceptionally high amount of physical and psychological energy. 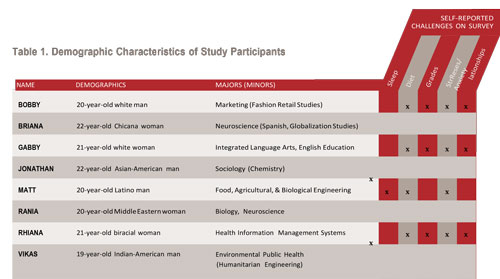 In “Doing School: How We are Creating a Generation of Stressed Out, Materialistic, and Miseducated Students”and“The Overachievers: The Secret Lives of Driven Kids,” Denise Clark Pope and Alexandra Robbins, respectively, report that each year,colleges welcome many high-achieving young adults who are products of an ultracompetitive primary and secondary educational system, as well as a college admissions process that rewards those who demonstrate both high academic achievement and high levels of extracurricular involvement. Further, in a 2005 The Adolescent Learner article, Pope and Richard Simon explained that many overinvolved high school students are motivated by the mentality that admission into a selective college is the key to a better life. These competitive norms continue during college as students focus on how involvement may positively impact future opportunities, such as employment, graduate programs, internships, and scholarships. The result can become a virtually untenable agenda of campus activities.

The study presented in this article explores the overinvolvement phenomenon and looks to start a greater discussion within the profession.

The purpose of this phenomenological study was to describe the essence of overinvolvement experienced by undergraduate students who are deeply or broadly engaged in cocurricular or extracurricular culture.Phenomenology is a qualitative methodology concerned with distilling the experiences a number of individuals have with a certain phenomenon to a descriptive statement of the universal essence.This qualitative study was not a hypothesis test regarding how much involvement is too much but rather an attempt to understand the phenomenon and describe it in depth.

Overinvolvement was defined as participation in cocurricular activities that resulted in involvement-related challenges, whether academic, social, or physical. Three research questions provided the basic framework for the study:

The population identified for this study was traditional-aged (18–24) undergraduate students enrolled full-time in their second year or beyond at a four-year college in the United States. A large, four-year public Midwestern university was used as the site for data collection. This environment was suitable for the study due to itsendorsement of cocurricular involvement as an essential aspect of the university experience. Participants had to identify as having experienced academic, social, health, and/or wellness challenges as a direct result of cocurricular involvement. Study participants could be transfer students and did not need to fit any specific criteria regarding gender, race, nationality, ethnicity, sexuality, socioeconomic status, or any other aspect of social identities. However, the final group of participants chosen for the study intentionally reflected some gender balance and representation of non-majority identities.


Through criterion and snowball sampling, eight students were selected for participation in the study. The four women and four men ranged in age from 19 to 22, were born in the United States, and represented diverse racial and ethnic backgrounds. The college activities in which these students participated ranged from varsity athletics, Greek life, student government, and cultural student organizations to study abroad, undergraduate research, campus employment, volunteer community service, and leadership development activities. Their collective involvement experiences represented a multidimensional cross-section of the opportunities available at their institution. See Table 2 for more details. 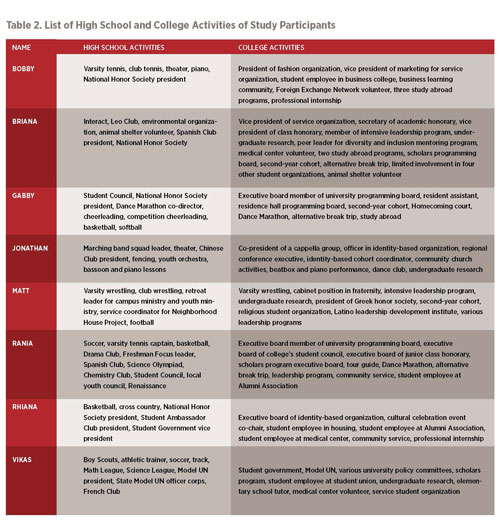 Each participant was interviewed twice using protocols grounded in the research questions. The interview transcripts were analyzed using the phenomenological method of horizontalization in which significant meaning units are culled from the text, grouped into themes, interpreted, and ultimately incorporated into a composite statement that reflects the essence of the phenomenon. This statement is reflected in the next section.


Compelled into competitive habits by a lifetime of pursuing activities and achievements that would help them get admitted to college, overinvolved students remain on a track to keep pushing themselves to excel throughout their undergraduate careers. They undertake a non-stop agenda of activities that consumes almost every hour of every day; they charge through each week despite multiple skipped meals and insufficient levels of sleep. They may be able to recover from the sleeplessness to some extent on the weekends, but the cumulative effects of the stress can leave them wondering occasionally whether or not the rewards are worth the effort. They forge ahead, though, because everyone else they know to be just as busy seems to be able to handle it well. They do not often talk about their struggles with their friends because they doubt others would understand, and they do not even feel like they have the time to explain.


The relationships they have allowed to become superficial or nonexistent, the grades that could have been better if they had been able to make time to study more, and the stress that has manifested itself in their bodies and minds in various (and sometimes debilitating) ways is a small price to pay for the promise of an advantage in the job or graduate school search. Is it not? They can never really be sure, but they are so devoted to their responsibilities for the benefit of others, they can barely imagine a different way of going through school. In fact, if they could do it all over again with the knowledge they now have, they might get even more involved because there are so many things they did not have time to try. This is the essence of overinvolvement.


For the eight students interviewed, the development of habitual overinvolvement as a norm occurred gradually, starting with elementary school. By the time they reached college, their own expectations for high levels of involvement were met with powerful messaging from the institution that encouraged involvement. Motivated to find belonging, serve others, and emerge from college supremely qualified for a competitive marketplace, these eight students plunged into their cocurricular lives. In spite of the resulting consequences—which included an unhealthy, caffeine-dominated diet, an average of 4–5 hours of sleep per night, strained relationships, academic shortfalls, and overwhelming struggles with stress and anxiety—the students held fast to their commitments because of the promise of intrinsic and extrinsic rewards. Only in retrospect were the students able to see that healthier outcomes could have been possible; but they maintained a great deal of personal pride in their ability to weather the considerable challenge.


Direct quotes made by the students during the study help illustrate the phenomenon:

The students in this study were just eight examples of the purpose-driven experiences of overinvolved students.


Each student from the study knew of others who were dealing with the same challenges. This, coupled with the high number of students who responded to participate in this study, indicates that overinvolvement is a phenomenon experienced by an untold number of college students. Students are prioritizing responsibilities over physical and mental health. It can be difficult to identify those students who are overly involved, but as an understanding of this phenomenon grows, student affairs professionals can take steps to help their institutions address this issue.


Be more intentional about the messaging shared with prospective, new, and returning students about the importance of involvement. Rather than simply showcasing the diversity and excitement of available involvement opportunities, encourage students to be thoughtful and selective about opportunities they will find meaningful. As showcased by this study, students are often conditioned during the college admissions process to believe that overinvolvement will be rewarded. Institutions can instead create a narrative that highlights the positive outcomes of intentional involvement, assuring students that being overly involved is not necessary to achieve their goals. It may be worthwhile to survey career services professionals on campus for guidance on whether students’ perceptions of the need to engage broadly are truly grounded in the reality of what employers and graduate programs value. Consistent messaging from multiple sources about pathways to career success might help to dispel the assumption that a lengthy résumé is the only way to distinguish oneself.


Several study participants indicated that they became overinvolved during their first two years of college, then were unable to let go of those responsibilities. It is crucial to debunk myths about the need for overinvolvement and to provide resources to help students make intentional choices early in their college careers. Study participants also attributed some of their early difficulties to taking on too many different activities and advised others to have the courage to quit when activities lostmeaning or importance to them.Providing avenues for self-reflection may result in more thoughtful decision making and greater efficacy for students to decide what really matters to their own development. This is an opportunity for partnership between academic and student affairs. A curricular setting that resembles a senior capstone class earlier in their college career could be the ideal environment for students to do this.


Institutions can consider the reward structures that characterize campus culture. For example, do scholarships, awards, and other forms of recognition typically go to the students who have the greatest number of different activities on their résumés? Or is the quality of the students’ contributions evaluated? Several study participants described knowing many of the other highly involved students on campus because they would see each other in different forums, receptions, recognition events, or elite leadership settings. These types of institutional gatherings, roundtables, and task forces can have the unintended consequence of conferring status on those whose involvement is most visible to the campus administration and perhaps marginalize those whose efforts are more difficult to notice. Pope and Robbins both noted that social capital is a powerful incentive for overinvolved students.If institutions took different measures to identify and validate student contributions, and these opportunities were distributed more equitably among students, there could be a shift in the way students work for those rewards.


Normalize the candid sharing of challenges and the supportive response of peers. Student organization advisors, student employee supervisors, and other staff and faculty can appeal to highly involved students by acknowledging the existence of this phenomenon, describing it, and creating a supportive climate for discussing the challenges openly. Carving out time to have interactive discussions with groups of students and then follow-up meetings with individuals about the challenges of their involvement experiences could be effective first steps in making vulnerability more socially acceptable.


The benefits of extracurricular involvement arenumerous, but students need to learn to prioritize self-care. Student affairs administrators, particularly those in direct cocurricular advising roles, face a difficult and important challenge to identify students silently struggling with overinvolvement. Leveraging the relationship- and trust-building strengths that undergird effective advising, practitioners can use insights gained from studies like this to nurture a culture of purposeful student engagement. The result could be a thriving cadre of student leaders who role model healthier norms for physical and emotional well-being. 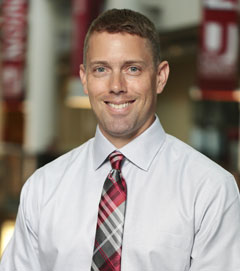 Matt Couch, Ph.D., is the associate dean of students and senior director of student activities and orientation at The Ohio State University.