“Wow! Thank you so much,” Harrington said when her name was announced. “Words cannot convey how much this association and the opportunities that have been afforded to me through this association have meant to me. I’m a shy, quiet woman from New York who never thought this award would ever be something bestowed upon me.”

Harrington has been associate vice president of human resources and chief human resources officer at Georgia Institute of Technology since 2015. In her 15 years at Georgia Tech, she also served as director of the Georgia Tech Student Center from 2010–15 and as its associate director from 2001–10. Prior to that, she was assistant director of the Georgia State University student center. Harrington holds a master’s degree in counseling and educational psychology from the State University of New York at Buffalo and a doctorate in educational psychology from Georgia State University.

For ACUI, Harrington has been a volunteer for more than 15 years, beginning as a regional conference coordinator in 1997. She has been a Conference Program Team member, regional director, Growing the Profession Task Force co-chair, and Board of Trustees at-large member. As president of the Association in 2015, Harrington oversaw the hiring of a new chief executive officer.

Longtime ACUI volunteer and honorary member Sally Hammock, director of programs at Georgia Tech Student Center from 1974–2010 (now retired), presented the award to Harrington. Hammock, who described Harrington as “the personification of ACUI’s core values,” first met the honoree about 20 years ago at an ACUI conference.

“I recall being immediately impressed and hoping that our paths would cross again.  There was an openness about her, an approachability, and an air of good cheer that made the encounter stand out in a situation in which I was meeting many people,” Hammock said. “Fortune smiled upon me, and in time we happened to serve in ACUI leadership positions at the same time, which provided the opportunity for working together. My initial impression was validated, and I continue to be impressed, and at times, amazed.”

One of the Harrington’s hallmark attributes is her ability to connect with others, Hammock added. “I am speaking about really connecting, as evidenced by a sincere interest in others, skills in mentoring, commitment to our profession and to ACUI, modeling of ACUI’s core values, and skills as a team player, whether in a position of leading the team or serving as the newest member,” Hammock said. 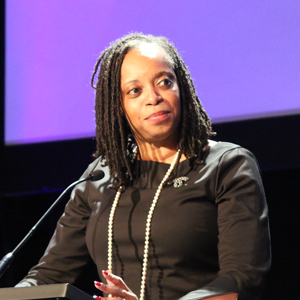 When dangerous storms were passing through the Georgia Tech campus, Hammock recalled telephoning Harrington to check on her well-being.

“My call was greeted with cheer,” she recollected. Harrington was “at the student union, mopping floors, as the storms had caused some flooding. It is this ‘can do’ attitude, the willingness to roll up sleeves and do whatever it takes to keep the doors of the union open to serve students, staff, faculty, and campus visitors that epitomizes her dedication,” Hammock said.

Harrington, in receiving the award, responded with words of surprise and humility: “I’m shocked and awed by this tremendous, tremendous honor. I’ve considered my career in the college union a privilege to have an opportunity to impact the lives of students, to add value to their experience, and to work with colleagues and peers who’ve become friends. Again, all I can do is just say thank you. This has been a tremendous, tremendous honor.”