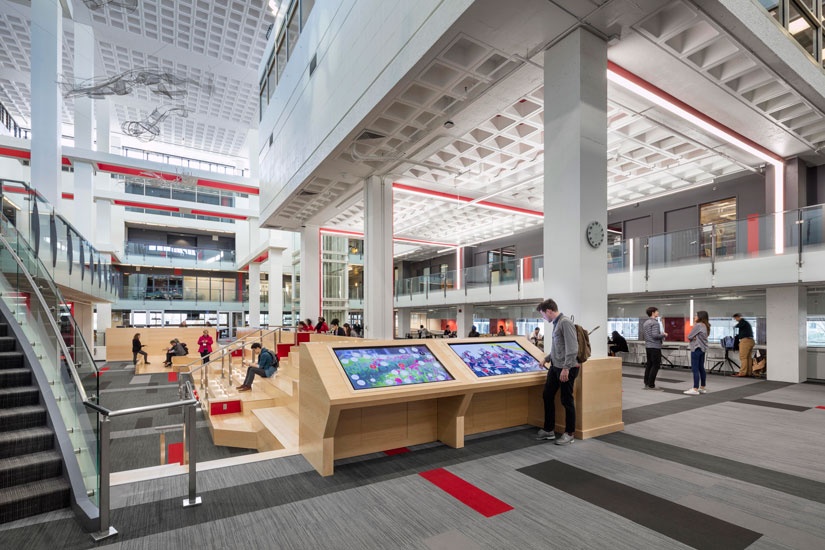 The Curry Student Center (originally the Ell Student Center when it opened in 1964) was created after a student-led referendum was passed that charged each student a fee to construct the building. After a major renovation in 1994 that was funded by a second student-led referendum, the building was rededicated in honor of then-President John Curry and his wife Marcia in recognition of their support for student life on campus.

When the building celebrated its 50th anniversary, former students returned to reconnect and share memories of their time in the student center. Time capsules enclosed in the wall in 1964 and 1994 were opened, and a new, third capsule was installed. That latest capsule is to be opened in 25 years.

The building went through major renovations in 1994 and 2015, the most recent of which included a refresh of the Indoor Quad area and the addition of a floating mezzanine to increase food court seating. It was during the 1994 renovation that the 1964 time capsule was discovered behind a wall that was removed. A 2016 renovation created Campus Crossroads, a concierge for the campus community and visitors.

The most recognizable space is the four-story open atrium that begins on the first floor and extends up four stories. Since opening in 1964, the Indoor Quad has been a gathering place for the campus community, playing host to many important university and community events.

Consistent with an institutional commitment to experiential learning, students are the main driving force behind programming at the union. Student leaders serve as program generators and coordinate all aspects, which provides opportunities to not only engage their peers, but also to grow and develop as leaders.

“We are proud of the fact that students played a lead role in the creation of the union and continue to shape the program 50 years later,” said Director Jeremy Reger.

Curry Student Center has hosted many high-profile events for the campus and local community, including the 100th Anniversary celebration of the university and the inauguration of three university presidents.

The Center for Student Involvement supports hundreds of events each year in conjunction with the university’s 400 student organizations. One program in particular, Night @ the CSC, has been around since the 1980s. While it has changed significantly over the years, its goal of introducing students to the union remains the same. Additionally, afterHOURS was the first late-night venue on a campus in Boston when it opened and was one of only a few across the United States at the time. The space continues to host bands, comedians, and socials.