After more than 60 years, Arizona State University's Memorial Union was due for some major maintenance and a facelift. The multi-phase project's completion time was successfully trimmed in half from an estimated three years to 1.5 years. 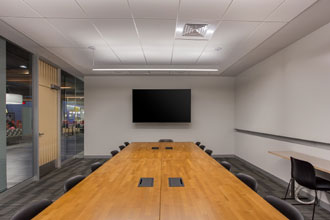 "We discovered walls where we didn't expect them, and power lines running over plumbing areas," said Director of Operations and Events Jeff Rensel. "The initial focus for the project was a three-year phased project to address deferred maintenance and aesthetics in the building, as well as provide updates to programs and services. The project was condensed from three years to one-and-a-half, which caused some unique problems."

The Memorial Union serves as many as 14,000 guests on any given day, and enriching their experience was one of the primary goals for the renovation. Providing the necessary functional upgrades like updating the recreation and dining areas were on the punch list, and a number of new amenities were also planned, in addition to establishing a fresh road map for ongoing improvements.

Student focus groups and working groups participated in the design and proposed use discussions, as did representatives from ASU's Undergraduate Student Government, the Student Fee Board, and the Council of Coalitions. Student input included opinions on furniture selection and floor layouts, and the project team from ASU and the design firm Studio Ma kept students updated on project advances, gathering feedback and facilitating student engagement throughout the entire process. 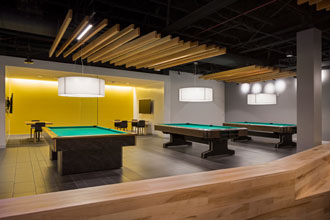 Memorial Union's North End and Sparky's Den recreation, an area of 15,170 square feet, was renovated to include more dining space, new areas for billiards and table tennis, and saw the addition of a new Student Media Services center that included the purchase of a ChromaKey Studio Pro digital creative suite. Approximately 1,500 square feet of meeting room space was renovated, and a 2,500-square-foot meditation and ablution space was added. Additional improvements included new restrooms, an elevator, new flooring throughout the first and second floors, and construction of a featured stairwell connecting the main level to the lower level.

The LEED-certified project also anticipated future opportunities for water recycling and reuse by having special purple pipe installed in all restrooms—the same type of pipe used by municipalities for irrigating landscape, cooling industrial equipment, and flushing toilets. Recycled wood from the former Memorial Union bowling lanes was also repurposed to construct a desk at a new recreation center, and other bowling center parts were redistributed to complexes in the Phoenix metropolitan area.