That is an incomplete list of campuses that have experienced student opioid overdoses and overdose deaths. In 2016, the epidemic claimed 40,000 lives across the United States, according to the National Center for Health Statistics. 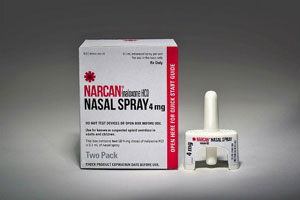 Unions are hosting workshops and overdose rescue training sessions, both student and professional union staffers are being trained to administer life-saving overdose-reversing drugs, and some campuses are making those drugs (NARCAN and naloxone) available or free-of-charge at campus health centers, residence halls, and a variety of other locations.

“We’re excited and proud to be offering this life-saving drug on our campus,” said Maribeth Flakes, associate director in the of Office of Student Involvement & Leadership at Bridgewater State University, where NARCAN is stored with the union’s automated external defibrillators. “I went to a training, but our entire professional staff and student employees have not been yet. Our resident assistants on campus have been trained.”

Bridgewater currently has NARCAN available at 50 different locations on campus and has conducted delivery training events for staff, students, and the general public.

At Frostburg State’s Lane University Center, 12 employees, including seven students, were trained to provide NARCAN in opioid overdose emergencies through a partnership with the county health department. That partnership allowed for the prescriptions, which Director Allen Flanagan said cost about $150 each, to be filled at no charge through the local hospital.

“That first training was offered on campus and about 50 people were trained,” he said. “The session lasted about 90 minutes, and all staff were provided with a quick response kit and a prescription for NARCAN.”

Duquesne University Union is in the unique position of having health services located under its roof, so medical staff have a response time of under one minute if an overdose were to occur on site.

“This is an issue we’re especially interested in since we are located in an urban area,” said Brigitte Szivos, associate director of union operations. “Public safety personnel are all trained and have NARCAN in their medical bags.”

At the University of Texas–Austin, students have access to naloxone at 24-hour residence hall desks, the University of Washington has placed naloxone kits next to fire extinguishers in case of emergencies, and more than 20 college and university system police departments have trained officers carrying naloxone.

In Washington Post opinion piece, Jennifer Plumb, University of Utah clinical professor and the medical director of Utah Naloxone, warned that placing naloxone at a handful of sites on a campus might create a false sense of security. Broad distribution is essential, she said.

“It’s imperative that naloxone be placed directly with the people who are most at risk of an overdose or are most likely to witness an overdose: the roommates, family members, friends, and even relative strangers. This is how layperson access to naloxone has been successful at saving lives over the past decades,” Plumb wrote.

The pharmaceutical company Adapt Pharma and the Clinton Health Matters Initiative of the Clinton Foundation made 40,000 free doses of NARCAN available to colleges and universities in the United States, but as of October 31, 2017, only 216 institutions in 35 states had requested and received 1,728 doses. NARCAN communications director Thom Duddy said the majority of the doses have gone to campus security and law enforcement.

“College campuses have an obligation to provide education and resources to make young adults and campus employees aware of the dangers of misusing opioids and how to intervene when an overdose occurs,” wrote professor Lori Hollenran Steiker, University of Texas–Austin School of Social Work, in the Journal of Drug Abuse. “Teams must find ways to collaborate and achieve effective communication and networking between community experts, academic specialists, researchers, students, faculty, staff and university administrators. Overdose prevention trainings exist and can be tailored for university groups. The greatest challenge is weaving policy, practice, and research for further impact on college campuses. We need to act quickly. There are lives to be saved.”