Not every student union has over 100 years of history to protect like University of Pennsylvania’s Houston Hall, the oldest in the United States at 131 years old. But every union does have a history worthy of preservation, and doing so can follow traditional paths—like working with your university’s archivist—or nontraditional paths. 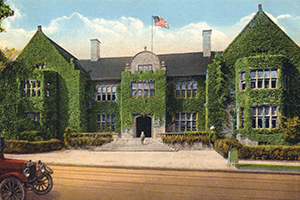 “We asked people to write down their favorite union memories and then to go that place in the union, where we took their picture,” said Rhode Island College Student Union Director Kristen King Salemi on celebrating the union’s 50th anniversary in September.

When Wayne State University Student Center underwent a recent renovation, Director Andrea Gerber said they found themselves in a quandary over an ages-old tradition of students flying paper airplanes into the ceiling.

“There were thousands of them, many with personal messages on them,” said Gerber. “The renovation formally ended the student tradition, but we made a display that honors the tradition and that contains a number of the old airplanes.”

The student center also conducted a social media campaign with Alumni Relations to return old airplanes to their original owners. Wayne State alum and Aetna CEO Mark Bertolini even returned to the student union to look for his airplane and take part in the campaign.

Preserving and celebrating union history can be quirky and fun, but there can be challenges. While Wayne State was remodeling its union, a 1941 six-foot-wide original mural by William Gropper had to be protected on site during construction. A curator from the Smithsonian Institute, which owns the work, consulted with a local contractor to see that proper protections were put in place during renovation.

Archivists can make recommendations about maintaining items at the union and offer a safe store house for old, valuable and sometimes unusual items.

When Houston Hall was in the middle of a renovation in 2000, manager Kris Patterson called in university archivists when artifacts belonging to the original Houston family had to be moved from a display case. The items included a number of deteriorating manuscripts and a sword believed to have belonged to John Houston during the Revolutionary War. Penn archivist Mark Lloyd said it would have cost $20,000 to properly conserve the fewer than 10 items that included the sword, but Houston Hall didn’t have the budget for it. So, all the items are now safely stored in a climate-controlled, limited-access area of the university’s archives.

South Dakota State University Archivist and Special Collections Librarian Michele Christian said they usually get called when someone is moving or renovating; “We come in with our boxes and take things away and cull them out.”

She recommended the following steps that unions can take to preserve items:

Archivists can be a union’s best friend in a variety of ways, not just as rescuers.

Before his retirement as archivist at the University of Northern Iowa, Gerald Peterson led the creation of a 4,000-word, 36-photograph history of UNI’s Maucker University Union that remains on the UNI website today. Additionally, UNI archives currently hold 6.5 linear feet of boxed documents and artifacts from the union.

“We’re doing a lot of outreach right now because so much is going online and in the cloud, so we’re asking people to let us know before they throw paper copies away,” said UNI Assistant Archivist Joy Lynn.