It may soon be time to wave goodbye to Wi-Fi and turn to the luminous future of light fidelity (Li-Fi). Li-Fi was coined in 2011 at TEDGlobal by Harald Haas, the chair of mobile communications at the University of Edinburgh and chief scientific officer of pureLiFi. 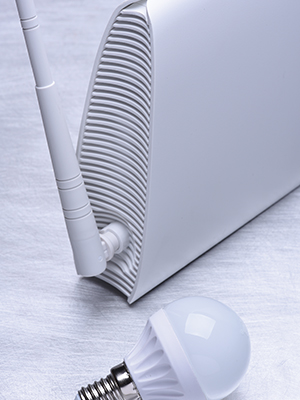 The paper “Modulation Techniques for Li-Fi,” written by Mohamed Sufyan Islim and Haas, described Li-Fi as “the complete wireless, bidirectional, multi-user network solution for visible light communications that would operate seamlessly alongside other Long Term Evolution (LTE) and wireless fidelity (Wi-Fi) access technologies.” While Wi-Fi works by using radio waves to transmit information, Li-Fi transmits data through “the rapid subtle changes of light intensity that is unnoticeable by the human eye,” according to the paper. Li-Fi uses Visible Light Communication, the visible light spectrum, to transmit data. An LED lightbulb in a college union could be used to send data.

Light, or electromagnetic radiation, is created when atoms and molecules oscillate back and forth constantly. Light always moves at the same speed in a vacuum but has a range of wavelengths and frequencies. Visible light, the only wavelengths visible to most human eyes, is a small part of the electromagnetic spectrum. This spectrum is divided into categories based on wavelength. The spectrum ranges from radio waves, which have the longest wavelength and lowest energy, to gamma rays, which have the shortest wavelength and highest energy.

What does this have to do with Wi-Fi and Li-Fi? Wi-Fi uses radio frequency technology to transmit data, but according to the paper by Islim and Haas, “The radio frequency bandwidth currently used is a very limited resource.” Wi-Fi transmits and receives data most commonly at 2.4 GHz and 5 GHz frequencies. In the United States, the Federal Communications Commission found that in 2016 the average download speed across all consumers was 39 megabits per second. Islim and Haas said it is predicted that “a data rate of 100 gigabits per second is achievable for Li-Fi when the whole visible spectrum is utilized.” This hasn’t been accomplished, and according to Haas’s website, this isn’t a possibility without a change in
lighting technology.

Functional Li-Fi was obtained in a different form in March of this year. Rather than using visible light, a Ph.D. student named Joanne Oh at the Eindhoven University of Technology utilized infrared to exceed 40 gigabits per second over a distance of 8.2 feet. Oh was working on the BROWSE project when she successfully transmitted data through direct infrared rays.

Potentially, Li-Fi could be used in facilities to transmit data faster than Wi-Fi ever could. Additionally, light waves, unlike radio waves, can’t pass through walls. A person using Li-Fi in one room would not be able to connect to Li-Fi in the next room over. Since Li-Fi wouldn’t interfere with LTE or Wi-Fi, all three could work together harmoniously to bring students, faculty, and visitors the internet connection they need.