Constructed in 1975, the building was originally named the Commuter Center because Northeastern Illinois University was formerly a 100% commuter institution. The Commuter Center underwent a major renovation in 1998 and was rebranded as the Student Union.

In 2013, three university departments combined into one called Student Union, Event, and Conference Services. This department oversees all operations of the Student Union, campus dining and catering, Information Center and Box Office (including administration of the campus ID system and Chicago Transit Authority U-Pass program), Northeastern Programming Board, and the fine arts auditorium and recital hall spaces. 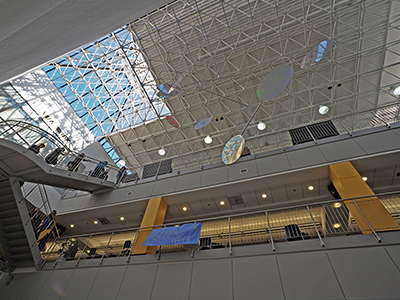 The Student Union is home to campus hotspots such as the Golden Eagles Nest Cafeteria, campus Information Center, Relaxation and Meditation Room, and 10 conference/event rooms of various sizes including the 6,000-square-foot Alumni Banquet Hall. The Student Union schedules and facilitates more than 12,500 meetings, events, and conferences each year.

“Our Student Union operations are funded 100% by the Student Union Fee, which is a fee charged per credit hour,” said Kyle Burke, director of Student Union, Event, and Conference Services. “We do generate revenue from private rentals of our facilities to outside entities. Revenue generated from this program is used for facility upgrades and operational improvements.”

The Golden Eagles Nest Cafeteria, located on the lower level of the building, is the hub of student activity. Among the numerous events held in this space are the annual Top Chef competition, student performance showcases, student dance performances, and open mic events. In the Top Chef competition, modeled after the show Iron Chef, students are given 20 minutes to cook an entrée (with an electric hot plate) and a dessert using certain provided ingredients.

Student staff also manage the Information Center, handle a majority of event setups and teardowns, and assist with technical components on shows in the Fine Arts Auditorium and Recital Hall as part of the Production Technical Services team.

Scenes of the NBC television show Chicago Justice have been filmed in the Student Union. Students who had the opportunity to act as extras made their television debut in episodes three and nine of the first season.

The Northeastern Programming Board sponsors a number of annual programs that students look forward to participating in each year, such as the annual Top Chef competition, student talent show, and late-night breakfasts served by the university’s top administrators. The board’s premiere event, Fall Fest, coincides with Alumni Weekend and books local bands that often feature alumni performers.