In 1989, what was then the university’s administrative building underwent major renovation to transform into a beautiful student center beloved by the West Texas A&M community. It was named the Jack B. Kelley Student Center upon a tremendous endowment contribution in the memory of former local businessman Jack B. Kelley, owner of a large helium trucking business.

In 2012 Eric Langeliers created the 9.5-by-26-foot buffalo sculpture, which has been the background of many visitors’ photographs as it’s a cherished possession of the “JBK.” The colored affect comes from the heating of different metals; the sun and grass were the only pieces stained to achieve their desired color. 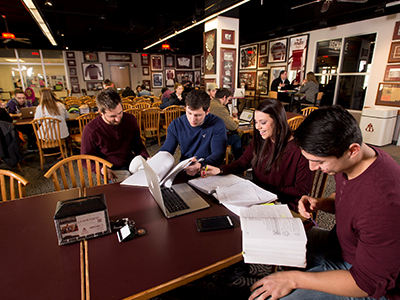 Legacy Hall, built in 2012, provides a space to host multiple types of meetings and entertainment events, capable of holding 500 guests in banquet style and 700 for theater.

“The university’s banquet hall, Legacy Hall, is regarded by many as the coolest room on campus because of its premium technology that always creates an outstanding show,” said Chance Haugen, director of the Jack B. Kelley Student Center.

The student-run Eternal Flame organization was created after years of institutional history was lost when Le Mirage yearbook ceased to exist in the 1980s. The organization strives to document and preserve student life through photos and content written by the staff members. Photographs taken at campus events such as sports games and sorority and fraternity functions are uploaded on The Eternal Flame Facebook page within hours of the event, and then are later published in a print edition for students and faculty to keep.

Every office staff in the JBK is comprised partly by students who manage events and handle day-to-day operational tasks. Students also partly form the committee that approves major changes inside the student center.

On Tuesdays the commons area hosts “Toons at Noon,” where students put on an open mic performance. The commons also hosts evening events such as bingo and karaoke throughout the semester. During finals week, departments host “Midnight Study Breaks” where studying students are served some sort of snack. For example, one night may serve s’mores, nachos, and cereal bars and the next night may be the student-favorite buffalo cookies and Dr. Pepper punch, a West Texas classic.

“On our first s’mores night for Midnight Study Breaks, the director decided to use the real fireplace within our commons,” said Katherine Romero, head student manager. “It didn’t take long to realize that was a bad idea; the fire alarm went off and the fire department quickly made their way into the smoke-filled building! We now do the s’mores night outside with outdoor firepits!”