April 24, 2017 Feature
According to a 2016 story released by Time, more than 150 American institutions have instituted measures on their campuses leading to the creation of gender-neutral bathrooms.

Also last year, a Georgia State University study in the Journal of Homosexuality found that “transgender university and college students are at a significantly higher risk for suicide attempts when their campus experience includes being denied access to bathrooms and gender-appropriate campus housing.” Data from the National Transgender Discrimination Survey (NTDS), a study of more than 6,000 transgender adults, including more than 2,300 individuals who self-identified as transgender while in college, were used.

Earlier in 2016, The Cooper Union, a private institution with fewer than 1,000 students, made all of the bathrooms on its campus gender-neutral. The signs outside restrooms now say: “Restroom with Urinals and Stalls,” “Restrooms with Only Stalls,” or “Restroom Single Occupancy.” The LGBTQ Center at Vassar College created the Gender Neutral Bathrooms Initiative, a project its website indicates was created “to ensure that all students have a place where they feel safe using the bathroom.” The goal of the initiative is to make sure each academic and administrative building on campus has “at least one accessible gender-neutral bathroom.”

Arising from the inclusion of all gender restrooms on campuses is the debate over what the sign outside the restroom should display. A wide range of signage and vocabulary have emerged. Some descriptors include: all gender, gender-neutral, gender-inclusive, gender open, unisex, and more. The Brooklyn-based company SmartSign created a new design after Sam Killermann, a social justice advocate, criticized the company for using an icon that appeared as “half-man, half-woman.” The new sign uses a toilet icon with the words “all gender restroom.” The company’s website gives more information about its all gender restroom signs and says organizations looking for all gender restrooms signs may be eligible to receive them for free. These signs are also given to colleges and universities for free.

It began with hiring a firm, Gannett Fleming, to do a study of major academic buildings at University Park. They looked at code and how many fixtures would be necessary for the population. After the study, funding was granted and the plan initiated.
The plan, which Howard hopes to finish within a year, is divided into two phases. The first phase focuses on switching the signage and creating more gender-neutral bathrooms, while the second phase focuses on making the bathrooms accessible.

Howard has enough funding to change 400 signs. The 178 existing restrooms will have new signs, and an additional 231 restrooms will be changed. What to put on the sign was not an easy decision. A group of students met with the administration to present their case. Research was done on what the options were and what other institutions had done. The signs will say “all gender” and include signage indicating accessibility.
“A good thing is I’ve gotten phone calls with four additional restrooms we didn’t have on our list,” Howard said. “That’s a positive.”

Howard also said she anticipated some pushback. Her response to negative comments has been: “Thank you for your input, but I think you’re misunderstanding that we’re not removing opportunities; we’re just giving more.” 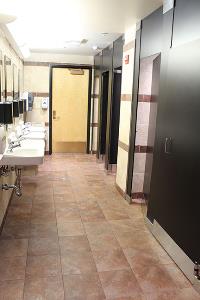 The restroom was first proposed by the UMC Board, a branch of university student government and the governing board of the UMC, in 2011.

“As our student union board and our staff talked with others about the need for an all gender restroom, we included the need for a facility that allows caretakers to assist their clients or family members of a different gender than their own,” Zelinko said.

The restroom was updated to include LED lighting for energy efficiency, improved ventilation and exhaust systems, upgraded floor drains, and sealed cracks and floor penetrations. The UMC has not had any problems so far.

“We had some security concerns initially, but our security team kept up their walks in the general area, and those concerns have been alleviated,” Zelinko said.

The term “all gender” was chosen because it was the most inclusive for those at the University of Colorado–Boulder, and the term was supported by students.

“Student unions are community buildings—the campus community and the broad community. We often have opportunities to engage our students in conversations about the facility, service, and program needs for students, the campus, and the community. This project was one that addressed a need among multiple populations and had strong student support,” Zelinko said. 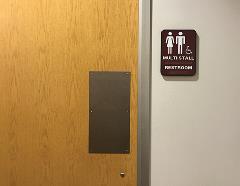 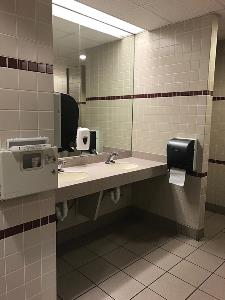 In November, Missouri State University labeled two bathrooms on the fourth floor of the Plaster Student Union “multistall gender neutral.” A map showing the types of restrooms available in high-traffic buildings is on the university website.

“Generally, the response has been positive and has been viewed as a way that Missouri State is listening and responding to its students,” said Terry Weber, director of the Plaster Student Union.

Each restroom is ADA compliant. One restroom has two toilets, and the other has three. Both restrooms have two sinks. The only modification made was to remove the urinal from the restroom previously considered “men’s” to alleviate privacy issues.

“We were intentional not to call them ‘family restrooms,’ as this was not our target audience and it was not the intention behind the change,” Weber said. “Referring to them as ‘multistall’ indicates that more than one person may use them at a given time, which may be a new experience for many individuals. It was important to make that distinction, to avoid people being unaware about the change we made.” 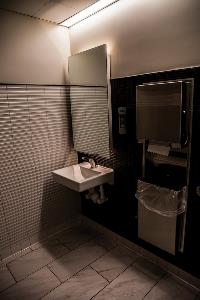 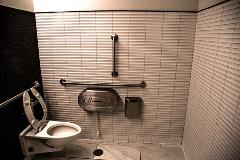 Duke University converted some single-stall restrooms in university buildings to gender-neutral facilities. Two student organizations, Blue Devils United and Duke Student Government, pushed for the project. They partnered with Facilities Management, the Center for Sexual and Gender Diversity, the Student Disability Access Office, and Office for Institutional Equity. There are now 10 gender-neutral restrooms located throughout the Bryan University Center, two in Penn Pavilion, and seven in West Union.
According to Christopher Roby, assistant vice president for student affairs, having dedicated gender-neutral restrooms in all Duke facilities “is an expectation.”
No new restrooms were constructed nor were current restrooms renovated. Existing single-stall restrooms received new signage. The restrooms themselves are each ADA compliant. Several of the restrooms have diaper changing tables, if space allows. The university has also added dispensers for free feminine hygiene products in all Bryan Center restrooms.

“The response has been very positive in the Campus Center,” Roby said. “Thus far we have had no issues or security concerns.”


The Arkansas Union at the University of Arkansas added gender-neutral bathrooms at the end of this last year. Two multistalled gendered restrooms were converted into three single-stall, unisex, and ADA-compliant restrooms, complete with all-in-one handwash sinks, changing tables, and individual room locks. 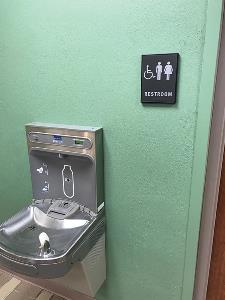 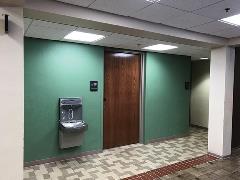 “The facilities are each simply called ‘restroom’ and feature a sign that has the traditional men’s and women’s symbols on it,” said Robert Stagni, director of the Arkansas Union. “The ADA compliant rooms also have the ADA symbol. The signageand wording was mutually decided on by the Arkansas Union and Campus Facilities Planning.” 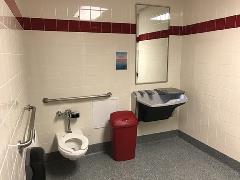 Along with the restrooms being converted, they were also upgraded. The walls and flooring now have more durable, new surfaces. The old sinks were replaced with all-in-one sink, soap, and blower units. The doors were upgraded to “Vacant/Occupied” locking mechanism, and other old fixtures were reused when possible.

“The response has been positive,” Stagni said. “The campus paper ran a story about gender-neutral restrooms around the time they opened, and featured ours and others on campus in the story.”