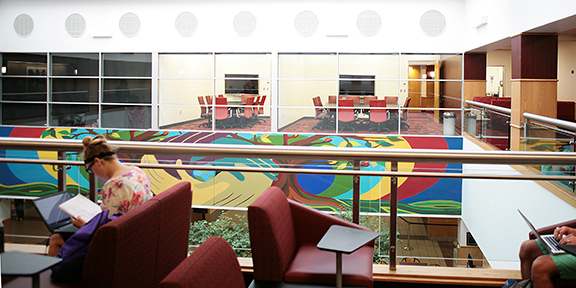 History
Located in the center of campus, the Campus Union was built to meet the ever-changing needs of the students and be the true “home away from home” facility. It has received three renovations through the years, most recently a $13.1 million renovation in 1999 to add food court space and meeting rooms. The facility was also renamed Plaster Student Union in honor of Robert W. Plaster, a local businessman and philanthropist who also provided the lead gift to renovate the Plaster Sport Complex, home to the Missouri State University football team.

Unique Features
The large variety of retail shopping and dining options in the Plaster Student Union include the Commerce Bank, Bear Necessities Convenience Store, Paw Prints Trade Bookstore, MaroonNation Alumni Store, 1905 Vintage BearWear Apparel, Starbucks, Chick-fil-A, grillnation, Papa Johns, Subway, Panda Express, and BurritoBowl. “The Subway in the PSU has been the highest grossing Subway in all of Missouri and Kansas for the past three years,” said Terry Weber, director of the Plaster Student Union. “Also noteworthy was the opening day sales of Panda Express, which in November 2012 grossed more than $100,000, the largest single opening day in Panda Express history. The line for orange chicken that day exceeded 45 minutes!”

Students can also enjoy amenities such as the student organizational complex and Games Center with eight bowling lanes. A large bronzed bear stands at the facility’s north end, where students flock to meet one another or take the all-important commencement picture using the hashtag #beargrads.

But the best feature may be the various meeting rooms. The union houses a 500-seat theater, 100-seat amphitheater-style Parliamentary (Senate) room, six meeting rooms which can be utilized in multiple ways based on size of group and needs, three board meeting rooms, and a beautiful ballroom which hosts many of the university’s signature events.

Students’ Role
The mission states the “Plaster Student Union unites the campus and provides opportunities for students to connect learning to life.” As such, students have a vital role in the operations of the facility with eight graduate assistants in addition to 50 operational student employees. “Students run the facility after 5 p.m., where a student building manager takes operational control and responds to all customer service and crisis management issues. Without their commitment and work ethic, the union would not be successful,” Weber said.