The Gretchen Laatsch Grant & Scholarship awards up to $1,000 to encourage the involvement of graduate students in scholarly research and writing for the field of college unions and student activities.

One or more awards will be given to recognize and support activities such as:

Note: This scholarship was expanded in 2017 to also provide grant funding to support graduate student involvement in research
Note: This award was not given in 2021 or 2022

The application deadline is November 21.

The review process includes, but is not limited to, an assessment of the criteria listed below. The submission must:

Special consideration will be given to students either currently in or intending to enter the profession. Students may apply annually but only receive funding once. They may submit more than one project for grant consideration; however, a complete application packet must be submitted for each.

Degree-seeking graduate students enrolled at an ACUI member institution who are not full-time employees at the institution are eligible for this award.

Submissions will receive electronic notification confirming receipt of materials. A confidential panel of judges will conduct an anonymous review of the materials to make the selection based on the criteria identified for this specific award. It is the goal that at least one recipient will be chosen per year, but multiple awards may be given depending on quality of submissions at each deadline and funds available. The panel has the option to distribute funds up to the full amount, partial funds, or to choose not to distribute the award at all. The decision of the judges will be final. One physical award will be given to each recipient project, which will be recognized during the awards ceremony at the annual conference and in subsequent publications.

Gretchen Laatsch's professional career begin as a graduate assistant with the Indiana Memorial Union at Indiana University. After receiving her master's at IU, she worked at the University of Georgia, then the University of South Carolina as the program advisor and then as program director. Throughout her time in programming, Laatsch had graduate student staff and truly loved working with entry-level folks. The last 19 years of her career were spent at the University of Akron as associate director in the Gardner Student Center, with an emphasis on operational policies, regulations, conferences, and special events. Never far from working with students, she advised a number of student organizations and assumed programming responsibilities during her final five years.

After serving as multiple terms as a regional representative, Laatsch became the ACUI vice president for regional affairs and was then elected to serve as ACUI president in 1994–95. She retired in 1998, when she also received the Butts-Whiting Award, the Association's highest award. 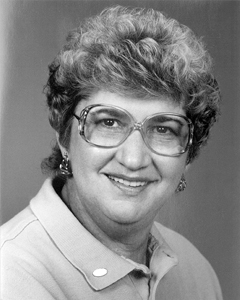