The Earl Whitfield Regional Outreach Award celebrates region’s within ACUI for their innovative communication campaigns. It acknowledges and promotes marketing ideas that satisfy a need for regional outreach regarding conferences, educational programs, and volunteer opportunities to inspire member engagement.

Region III is the recipient of the 2022 Early Whitfield Regional Outreach Award for the #StayConnected campaign. Through COVID, Region III were dedicated to staying in touch with members. This was done through a redesigned newsletter and a commitment to social media engagement. Through these means, the region shared relevant and timely information to effectively reach and connect their audience.

Nominations are due by December 9.

The review process includes, but is not limited to, an assessment of the criteria listed below. The outreach campaign must:

All ACUI regions are eligible to apply for this award.

Submissions will receive electronic notification confirming receipt of materials. A confidential panel of judges will conduct an anonymous review of the materials to make the selection based on the criteria identified for this specific award. One physical award will be given to the recipient, who will be recognized during the awards ceremony at the annual conference and in subsequent publications.

The Earl Whitfield Award was created to promote excellence in regional newsletters and to recognize those volunteer leaders who produced them. Through Whitfield’s involvement, he worked hard to ensure that member institutions in ACUI were provided services, support, and communications on a regional basis long before we had websites, email, social media, and all the technology of today. He believed that regional support and communication were the foundation for member engagement and service. Whitfield was a professional that believed in one of the most basic core values of our Association: providing the opportunity and the structure for learning.

Whitfield learned what the union was all about from his days as the president of the student government at California State University–Fresno. As he often said, “the skills I learned from the out of class experience prepared me to become the first union director at Fresno” and later, for his engagement with ACUI. From serving as a regional representative to being selected as the Association’s president in 1983, he was a mentor for many. His vision for strong regions that impact institutional communities enhanced the path to where we are today. Sincerity, warmth, and patience were Whitfield's mark on all of us—and his sense of humor and humility were among his exemplary traits. 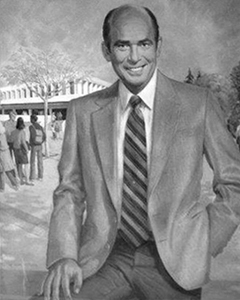