The Chester A. Berry Scholar Award is presented to an individual in recognition of outstanding writing that honors ACUI’s first executive director’s timeless and intellectual contributions in the field of college unions and student activities. The award provides a $400 cash prize to the recipient.

Nominations are due by December 9.

The review process includes, but is not limited to, an assessment of the criteria listed below. The submission must:

Individuals with ACUI membership are eligible for this award.

Submissions will receive electronic notification confirming receipt of materials. A confidential panel of judges will conduct an anonymous review of the materials to make the selection based on the criteria identified for this specific award. One physical award will be given to the recipient, who will be recognized during the awards ceremony at the annual conference and in subsequent publications.

About Chester A. Berry

Chester A. Berry set a standard marked by his intellectual approach to the field. This award honors a man whose writings seem to travel through time; pieces written by Berry are as relevant today as they were decades years ago. In the 1971 annual conference keynote, “The Union and the Two Cultures,” Berry wrote, “A union, at least a good one, is interdisciplinary. Its program should involve whatever is important or interesting. Its very operation demands the balancing of both the fiscal and the intellectual budgets. It brings together components that the community needs to synthesize an approach to living.”

As the director of Rhode Island and Stanford Unions, Berry was a visible leader in the profession—advancing education through conference programs, proceedings, and The Bulletin; authoring Planning A College Union Building and editing College Unions—Year Fifty; and leading the association’s research committee for many years. Serving as the association's president in 1960, his presidential address spoke on setting standards for college unions and union professionals, and almost 20 years later, Berry led ACUI, along with eight other associations, in forming the Council for the Advancement of Standards in Higher Education (CAS).

Berry also served as the first full-time employee of ACUI, working as executive secretary from 1968–81. 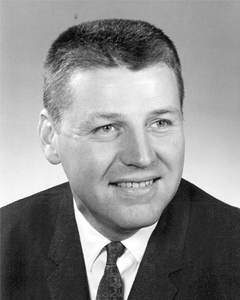