The Richard D. Blackburn New Professional Award honors an emerging leader in the profession for their energy and involvement in advancing campus community. The recipient receives a $400 cash prize to celebrate their commitment and allow for additional networking with peers, continued career growth, and professional development.

Edi Kuhn's student affairs journey began as a first-year student working as a member of the security staff in the Alumni Memorial Union at Marquette University. Today, Kuhn is as a full-time building supervisor in the same facility. Nominators describe Kuhn as a role model for employee service through campus involvement. In addition to attending several ACUI conferences, they are a member of the university senate, a diversity advocate, Pride Prom Planning Committee member, and the leader of a campus volunteer program that works with local homeless shelters. Kuhn recently began volunteering with a student affairs program that helps students with food insecurity. On a daily basis, Kuhn demonstrates the ability to show up and make a difference in other people’s lives. They were recently recognized with the 2019 Region V Rising Star Award. 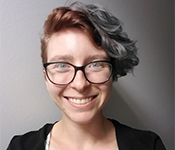 The review process includes, but is not limited to, an assessment of the criteria listed below. The nominee must:

Professionals with one to five years of experience in the profession at an ACUI member institution are eligible for this award.

The nomination deadline is December 11.

Blackburn served ACUI in numerous leadership positions, including president in 1968-1969 and executive director from 1982-1991. Throughout his career, which included serving as the director of the union on three college campuses, he demonstrated continuous commitment to the development of student leaders and to new professionals.

His support and encouragement of individuals is felt today through the leadership of college union and student activities administrators everywhere who had the privilege of working with him in the early stages of their careers. His influence on and encouragement of new professionals is reflected in this award, given annually to an individual who demonstrates the potential for excellence in the field of college union and student activities work.