During ACUI’s 2021 Annual Conference the Association awarded its highest honor, the Butts-Whiting Award, to the University of Houston’s Keith Kowalka. The assistant vice president for student affairs–student life, Kowalka has worked at the university for 23 years, and his career has spanned nearly 30 years of experience and achievement in student affairs and student unions, including a vital role in ACUI’s continued growth and development.

Kowalka began his career as director of campus information and assistance centers, student unions, at the University of Toledo. He then moved to Eastern Michigan University and spent several years in various positions, moving his way 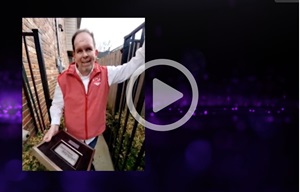 Kowalka moved on to become  director, and then executive director, expanding his responsibilities to all the facilities, operations, services and programs for University Center and Associated Facilities, including the management of approximately 200 employees. In 2010, he transitioned to assistant vice president for student development, applying his years of student union leadership experience to programs, services, and facilities, focusing on learning and student engagement.

In 2012, Kowalka joined a slightly new world: student affairs. He was promoted to assistant vice president for student affairs for the University of Houston, and continues ;to manage and supervise all student centers, the LGBTQ Resource Center, the Center for Student Involvement, the Center for Fraternity & Sorority Life, and others.

Kowalka’s colleagues regularly cite him as a great leader, role model, mentor, and friend. Words such as influential, awesome, caring, thoughtful, authentic, and many more positive descriptions are frequently used to describe him, as well as compliment his ability to connect all individuals together for a common goal.

The Butts-Whiting Award recognizes and honors outstanding leaders in ACUI, and the Association proudly awards Kowalka as the newest recipient. Congratulations to Kowalka and the University of Houston for their achievements and support throughout the years.