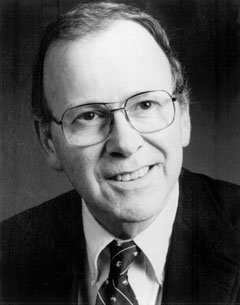 ACUI past president and Butts-Whiting Award Winner Ernest “Ernie” Bebb died October 18, 2018. During his 30-year career, Bebb was dedicated to the advancement of ACUI and the students with whom he worked.

“He was one of the kindest, most thoughtful, and caring leaders in our association,” said ACUI past President Shirley Plakidas, “He was a mentor to many, and a friend to all. He will be greatly missed.”

Bebb’s volunteer journey with ACUI began in 1953, when he served as a regional conference chair as an undergraduate student at the University of Nebraska. He never looked back. Other roles included regional representative, Annual Conference chair, Resolutions Committee chair, and vice president for committee affairs—not to mention his membership on numerous other Association committees. Bebb was elected president in 1975.

During his presidency, Bebb focused on finding ways to make the Association more effective. Under his leadership, ACUI established the Commission for Educational Programs and decided to hire a new full-time staff member to oversee the Association’s programming efforts. In an October 1975 Bulletin editorial, Bebb addressed the need to make this change: “Our members need all the educational programs and services possible, not just the most we can give with our present capabilities and structure.”

As Bebb advanced through volunteer roles at ACUI, his career blossomed as well. He served in the United States Air Force following the completion of his undergraduate career, then went on to earn a master’s degree from Michigan State University. He served as director of Hewitt Union and coordinator of student activities at State University of New York, College of Oswego before being named director of the University of Utah’s A. Ray Olpin University Union in 1968, a role he held until his retirement in 1995.

“Ernie was one of the first people I got to know when I got involved with our profession,” said ACUI Past President and University of Utah Director Whit Hollis. “Little did I know then that I would be following him serving at the University of Utah. Even in retirement, he was a resource, guide, and friend.”

ACUI honored Bebb’s commitment to the Association and profession with the Butts-Whiting Award in 1983. During her presentation, Cynthia Woolbright called Bebb “an eminent model” for the profession. Woolbright noted his dedication, talent, humor, and thoughtfulness.